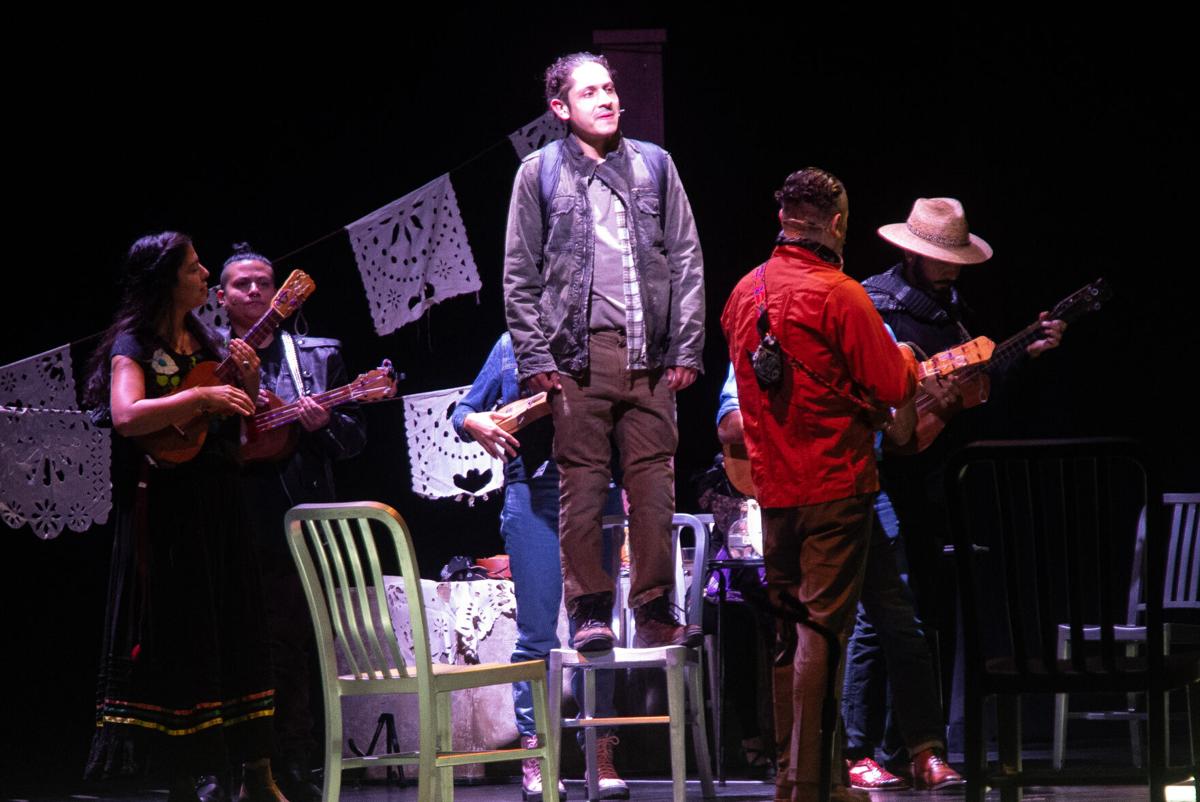 Actor Roberto Tolentino sings during a Thursday, Sept. 30, 2021 performance of "Fandango for Butterflies (and Coyotes)" at the Eisenhower Auditorium in University Park, Pa. Tolentino portrayed Johan in the play. 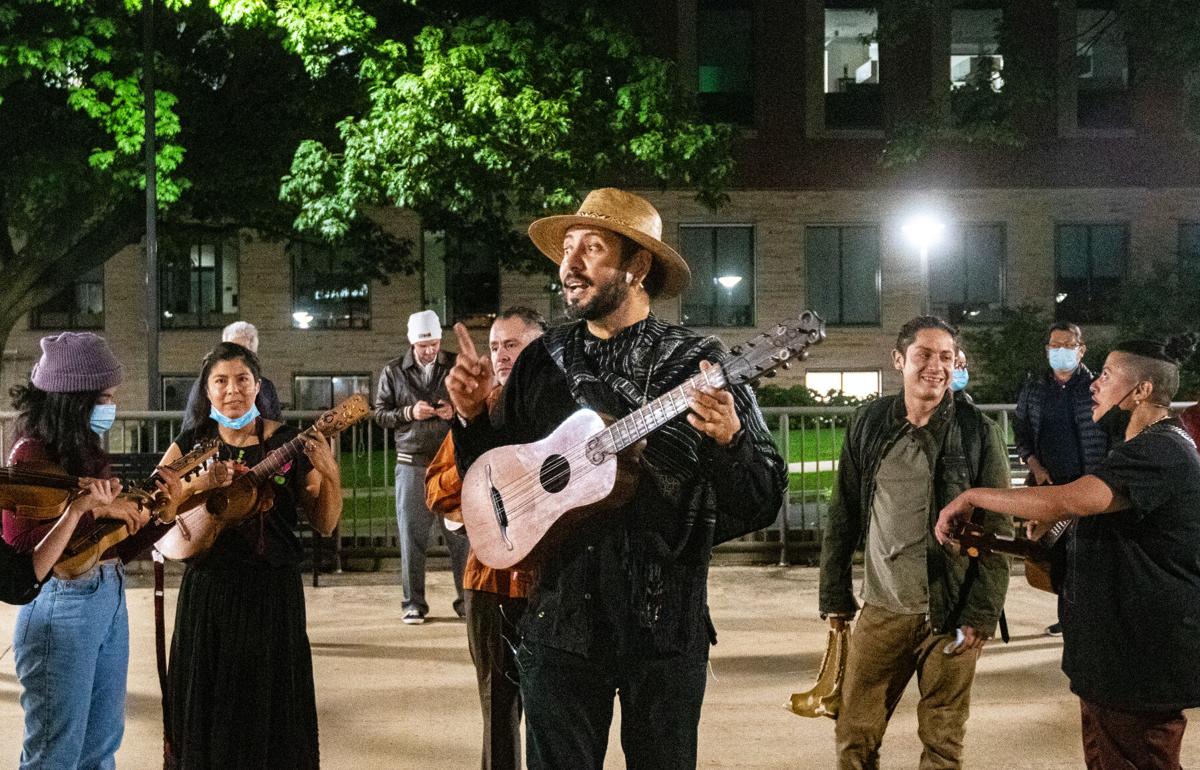 Composer, musician and "Fandango for Butterflies (and Coyotes)" music director Sinuhé Padilla speaks to audience members outside the Eisenhower Auditorium in University Park, Pa. on Thursday, Sept. 30, 2021 following a performance of the show. 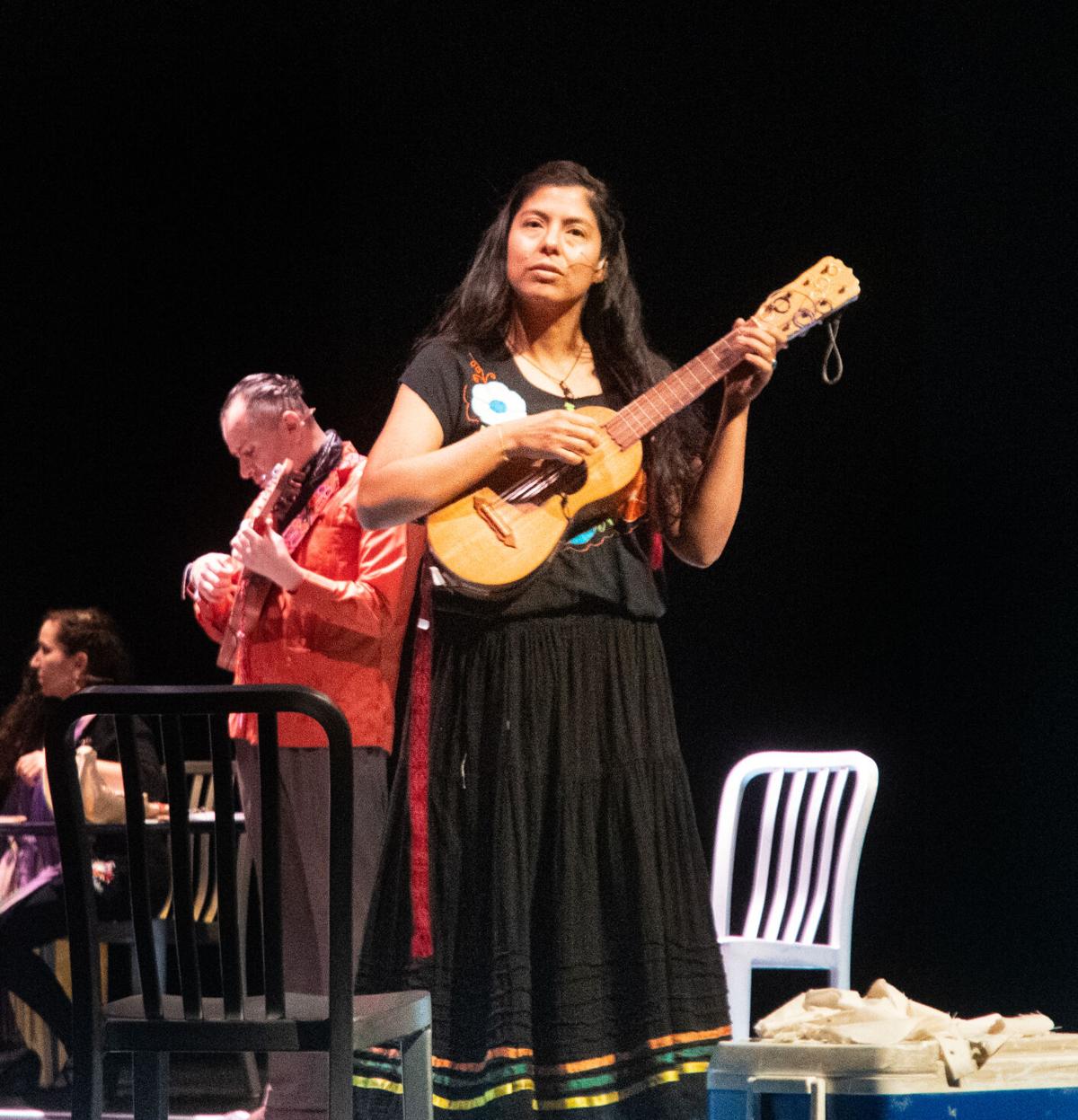 Brooklyn-based actor Jen Anaya tunes her Latin American string instrument before performing as Mariposa in "Fandango for Butterflies (and Coyotes)" in the Eisenhower Auditorium in University Park, Pa. on Saturday, Sept. 30, 2021. Anaya is a native of Yavapai Apache O'odham Land — currently Arizona — and said they drew upon their experiences as a Native American to play Mariposa.

En Garde Arts brought a taste of Latin American culture to Penn State’s Eisenhower Auditorium Thursday evening with a performance of “Fandango For Butterflies (and Coyotes)” — a fictional show written by Andrea Thome and inspired by real-life interviews with undocumented immigrants in New York, according to the show’s official website.

The hour-and-a-half long performance was hosted by Penn State's Center for the Performing Arts in collaboration with En Garde Arts' artistic director Annie Hamburger as part of CPA’s “The Reflection Project,” which aims to “create a sense of belonging and inclusion among the Penn State community,” according to CPA’s website.

Opening with a musical number filled with singing, dancing and Latin American instruments, the show quickly segued into personal character accounts of the immigration journey from countries like Honduras, Guatemala, Mexico and the Dominican Republic.

The play follows the story of six Latin American immigrants, half of whom are documented while the other half aren’t. They gather in a community center in New York for a “fandango” — “a community celebration where stories are brought to life through live performances, music and dance,” according to En Garde Arts.

Through their performances, the actors and actresses detail each character’s fears, experiences and life story as the shared camaraderie of their experiences draws them emotionally closer.

Professional actor Jen Anaya, who portrayed Mariposa in “Fandango for Butterflies (and Coyotes),” said the show “has a lot of information and a lot of heart” in it.

“This is a play that tells a lot of stories that don’t get told very often,” Anaya, who’s been performing shows in New York for about 15 years, said. “It is a piece that really seems to reach out and take hold of people’s imaginations and their hearts.”

English and Spanish were both spoken and sung somewhat interchangeably throughout the performance, and supertitles for the unemployed language were displayed on screens in the auditorium, perpetually translating the show.

When the show concluded, the actors and actresses led a procession out to the front of the Eisenhower Auditorium, where they continued to perform music and dance. Members of the outdoor audience were invited to step onto their platform and dance the “fandango” with them.

Student Cara Gould said attending the show was an opportunity to learn about different musical cultures and “the stories of the people who enjoy that music.”

“While Penn State is great, we’re really stuck in a little bubble,” Gould (junior-music education) said. “It’s really cool to have these experiences to see what everyone else’s experiences are like.”

Gould’s friend and peer Nico Bove said his reasons for attending were similar to Gould’s.

“I am not as familiar with this kind of music,” Bove (sophomore-cyber security) said, “so I thought it would be a really good opportunity to get a better understanding of it.”

Attending the show was an eye-opening experience for student Dylan Monteiro. He said it taught him about Latin American culture — but more importantly, about the journey immigrants make to the U.S. from Latin America.

“You never really see the life that those people had to go through before, unless you get to talk to them in person about it,” Monteiro (junior-physics) said. “It really helped me empathize with people who go through this kind of struggle and realize that there’s a lot more underneath than you really can see.”

Anaya said a main goal of performing the show was to educate audience members about Latin American immigrant experiences as they relate to current U.S. affairs.

“That was really the impetus for trying to get it out to a few different places,” Anaya said. “A lot of people don’t get to see themselves on stage, and a lot of people need to know these stories.”

And that was a primary motivation for joining the show in the first place, Anaya said.

“I noticed a little while ago that I am more interested than anything in telling stories that mean something to me and stories that I really think are putting something out into the world that is helping move it forward,” Anaya said. “I think that this is one of those pieces, so I really wanted to be a part of it, and I’m really grateful that I get to bring it out to different audiences.”

State College resident Mauricio Terrones, 53, attended the show with family and echoed several of Anaya’s sentiments regarding the show's purpose.

“People should be aware of what the life of immigrants is like,” Terrones said. “These types of events help us to bring people together and break barriers and become more united.”

Terrones, who said he is from Mexico City, Mexico, said he believes an educational performance on Latin American culture in the State College area is “what the country needs right now.” He said life for immigrants in the U.S. can be “complicated,” and performing a show like “Fandango for Butterflies (and Coyotes)” “creates awareness.”

“The United States is a country of immigrants, and some people have forgotten that,” Terrones said. “Here in Pennsylvania, many people think that there are not many [immigrated] people, but close to State College, there are many.”

Anaya said they thought Thursday evening’s performance accomplished what they and the “Fandango for Butterflies (and Coyotes)” cast and crew set out to do — “touch people” and “tell the story with a lot of love.”

But Anaya said the emotional takeaways of “Fandango for Butterflies (and Coyotes)” are simply a launching point for concrete political action motivated by the show’s themes. After seeing the show, Anaya said they hope audience members “seek out information about immigration and deportation and how people are treated and held.”

“I think that if we want to make any strides with how humans are treated within the borders of this country… it would help if everyone did their research and was a little more informed about what was happening,” Anaya said. “No one is illegal on stolen land.”