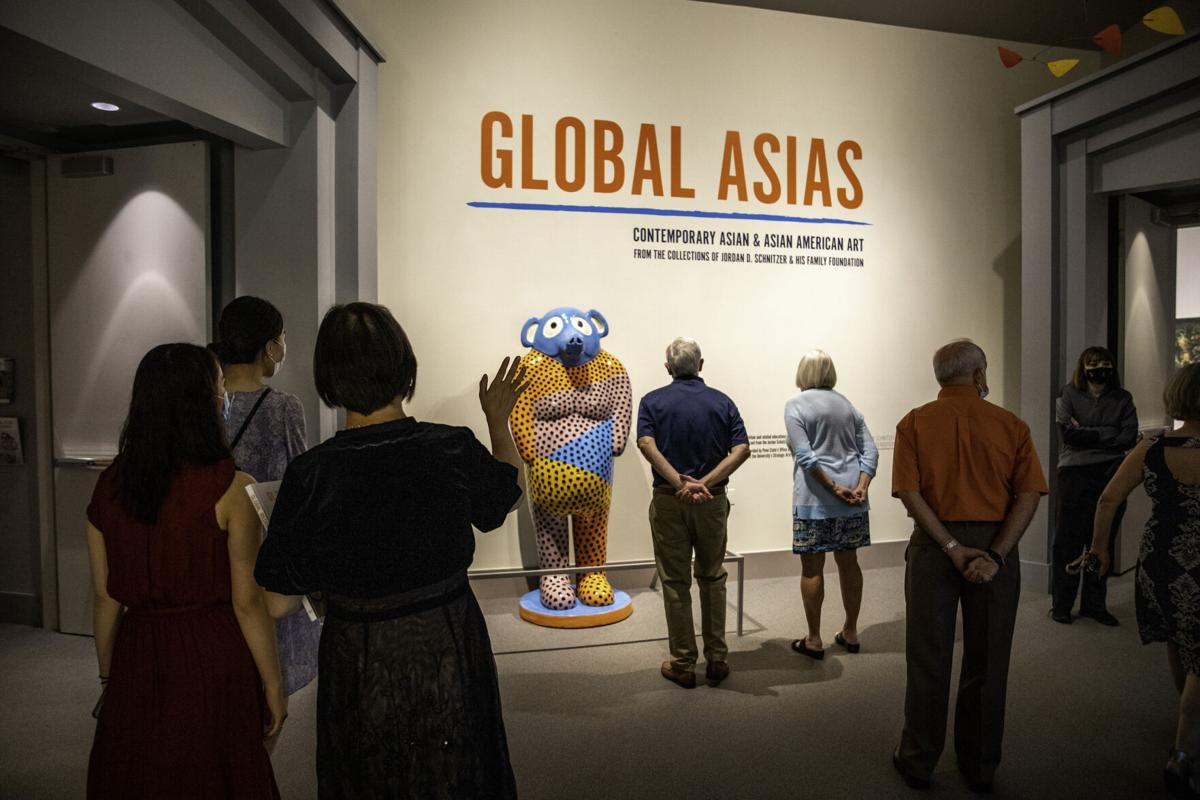 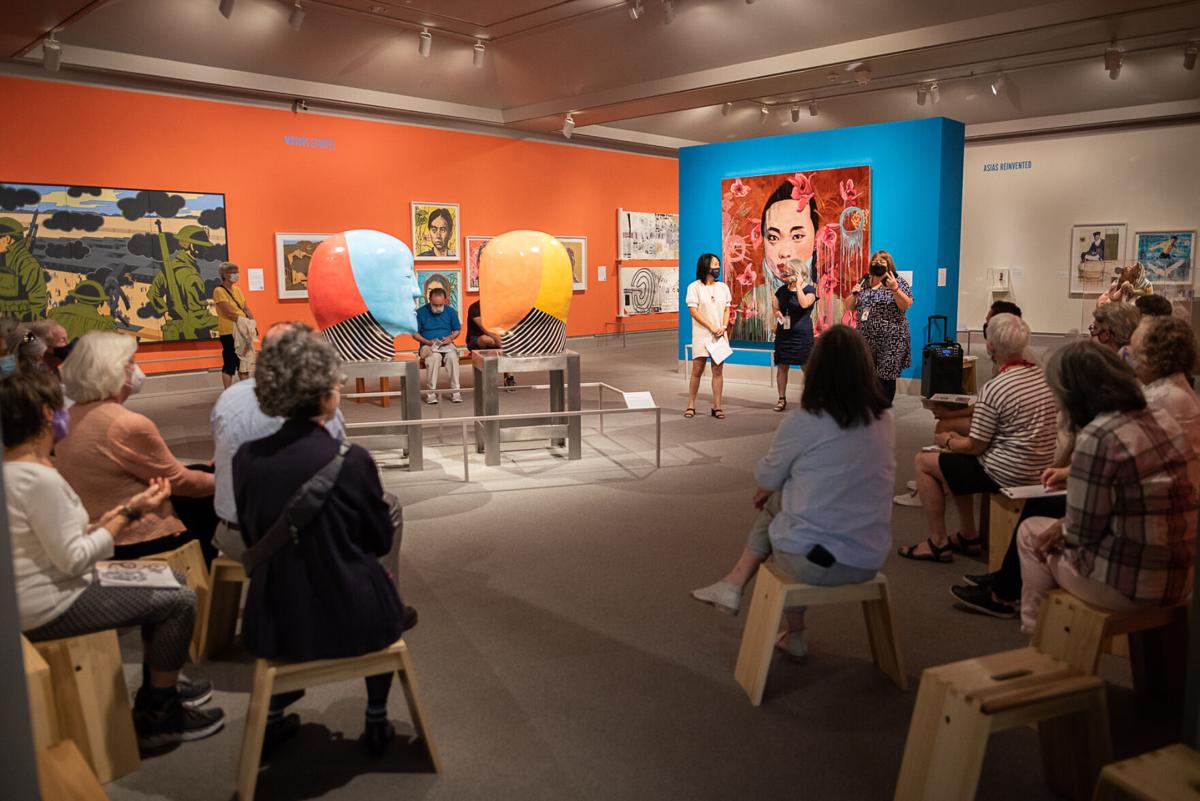 Walk through the front doors and up to the second floor in the Palmer Museum of Art to be greeted by a large “tanuki.”

That tanuki, a Japanese raccoon dog prominent in the culture’s folklore, is among the nearly 50 pieces of work that make up “Global Asias,” a new art exhibition at the museum, which will be on display until Dec. 12.

Beginning on Aug. 28, the exhibition showcases a variety of styles and cultures in modern and contemporary Asian and Asian American art. It features both two- and three-dimensional works and offers up pieces by artists from China, Japan, South Korea, Thailand, Vietnam and the United States.

Before the art was in State College, it was in Portland, Oregon, among the thousands of other pieces in the collection of the Jordan Schnitzer Family Foundation, a prominent collection of works in the city.

In Portland, Palmer Museum Director Erin Coe said she was “captivated with the impressive breadth and diversity” of Schnitzer’s collection of modern Asian and Asian American art. She and the museum’s assistant director, Joyce Robinson, approached Schnitzer about an exhibition in that exact area.

Closed for much of the pandemic, the museum had “great success” with much of its virtual programming, but it provides “authentic arts experiences and encounters with original works of art” best, Coe said.

“I like to think of the Palmer Museum as a place of restoration that will nourish us as we emerge from the pandemic and adjust to a post-COVID world,” Coe said via email.

But the exhibition’s proximity to the pandemic is not the only thing that makes it unique, Robinson said.

“This is the first exhibition we’ve devoted to contemporary Asian and Asian American art, which sets it apart, of course,” she said via email.

And for the new exhibition, Coe and Robinson invited Chang Tan, an assistant professor in the art history department at Penn State who specializes in modern East Asian and Chinese art. She accepted the invitation.

Tan said she first had to choose which exact works to exhibit. She whittled down from the 150-250 available pieces to the current 45 on display.

In picking these works, Tan said she wanted to break the viewers' association with more traditional forms of Asian art by offering up more modern and contemporary works.

Thursday evening, the Center for the Performing Arts at Penn State welcomed the community fo…

“I also want to refresh people’s views of Asian and Asian American art and hopefully also have a refreshed and more nuanced view of the cultures they represent,” Tan said.

And the tanuki that stands at the exhibition’s entrance is there to offer just that. Tan said the sculpture was crafted for display in public parks and other areas “to greet the public.”

As the viewer enters the exhibition, another sculpture by the tanuki’s artist, Japanese American Jun Kaneko, sits near the center of the room.

Two large human heads, one with some basic features and another devoid of a face, stare at one another as the viewer approaches.

“They kind of hover between the figurative and the abstract,” Tan said.

“Exuberant Forms” focuses on abstract art and Asian styles in that area. “Moving Stories” offers pieces which reflect on migration within and from Asia. And “Asias Reinvented” focuses on works that transform traditional styles of art to engage viewers, according to the “Global Asias” exhibition guide.

In the far corner of the “Asias Reinvented” section hangs a tiny print called “Iceberg” depicting an inverted and vaguely familiar image of an iceberg with human vehicles hovering around it.

Though small, Tan said the work is influenced by the famed woodblock print “The Great Wave off Kanagawa” and addresses the potential implications of climate change on the Earth.

“What’s the implication of presenting something so monumental, so important in such a small frame?” Tan asked.

But while viewers observe the depiction of catastrophe in a petite frame, one of the largest and most prominent pieces of the collection sits just behind them in the “Moving Stories” section.

“I am Large, I Contain Multitudes” — a reference to a line from Walt Whitman’s poem “Song of Myself” — is a large Vietnamese tricycle purchased on the streets of Ho Chi Minh City in southern Vietnam, Tan said.

The artist, Vietnamese American Dinh Q. Lê, covered the large transport tricycle with mirrors of various types to reflect approaching visitors. Tan said these inevitable reflections are meant to create a connection between the viewer and work.

But more broadly, Tan said she hoped to engage the community with the exhibition. Like Lê, many of the artists in the “Moving Stories” section have important and difficult backgrounds of migration.

“I saw that a lot of these artists, although they’re identified as Asian or Asian American — they’re migrants,” Tan said. “They have lived in many different places across the world, and the artworks reflect that experience.”

This is certainly true of Hung Liu and her series of “Official Portraits,” which line a section of wall opposite of “Iceberg.”

The three self-portraits represent various stages of Liu’s life. The first, “Proletarian,” shows her life in China and struggles under the emerging Maoist nation. The second, “Immigrant,” shows the hardships of migration but the hope of a new life. And the final portrait, “Citizen,” offers a glimpse of that new life and new rights, Tan said.

All of these portraits contain various Chinese identity cards from different points in Liu’s life. The artist died less than two months ago at 73 from pancreatic cancer.

“The portraits are obviously the same person, but they look very different because your identity and your feelings about yourself do change a lot as you move from one social road to another,” Tan said.

After the exhibition’s end in December, it will travel to viewers in Knoxville, Tennessee; Huntington, New York; Billings, Montana and Pasadena, California.

The exhibition, to Robinson, is all the more important because of the recent rise of anti-Asian sentiments during the pandemic and the resulting #StopAsianHate movement.

“I think it’s the timeliness of this show that resonates the most for me,” Robinson said. “We had no way to anticipate the anti-Asian American racist sentiments that sadly surfaced in the wake of the pandemic.”

Tan expressed similar feelings about “Global Asias’” relation to the ongoing strides toward racial justice. She said she hopes the exhibition will “engage all members of the Asian and Asian American community in State College and beyond.”

“I think an exhibition like this, which really shows Asia as extremely diverse and to a large degree American and modern and cosmopolitan, could probably shift people’s views in that regard,” Tan said. “They will see Asians not as one group and not as something that is essentially foreign.”

With an influx of in-person activities happening all around the State College community, it …

4 hiking areas around Penn State to explore this fall | Blog

As the leaves change and before Happy Valley weather becomes too bitter, there are plenty of opportunities for casual or more advanced hiking …