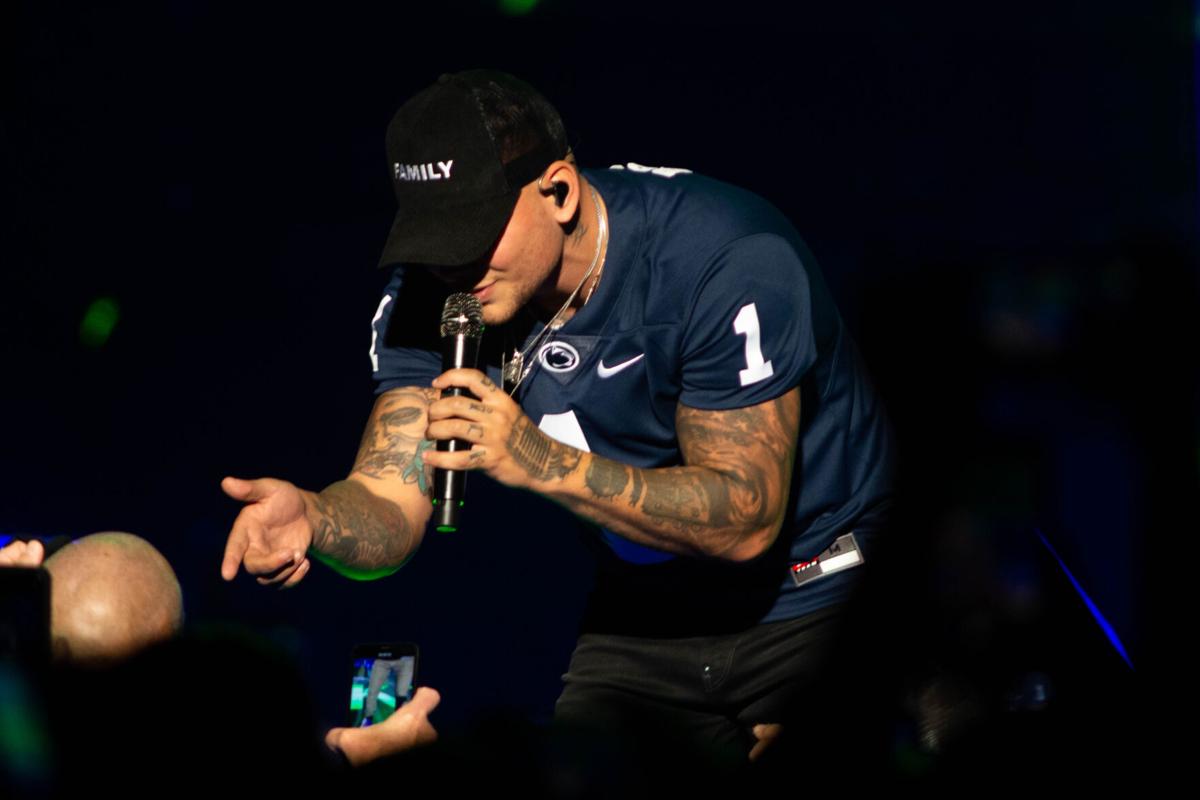 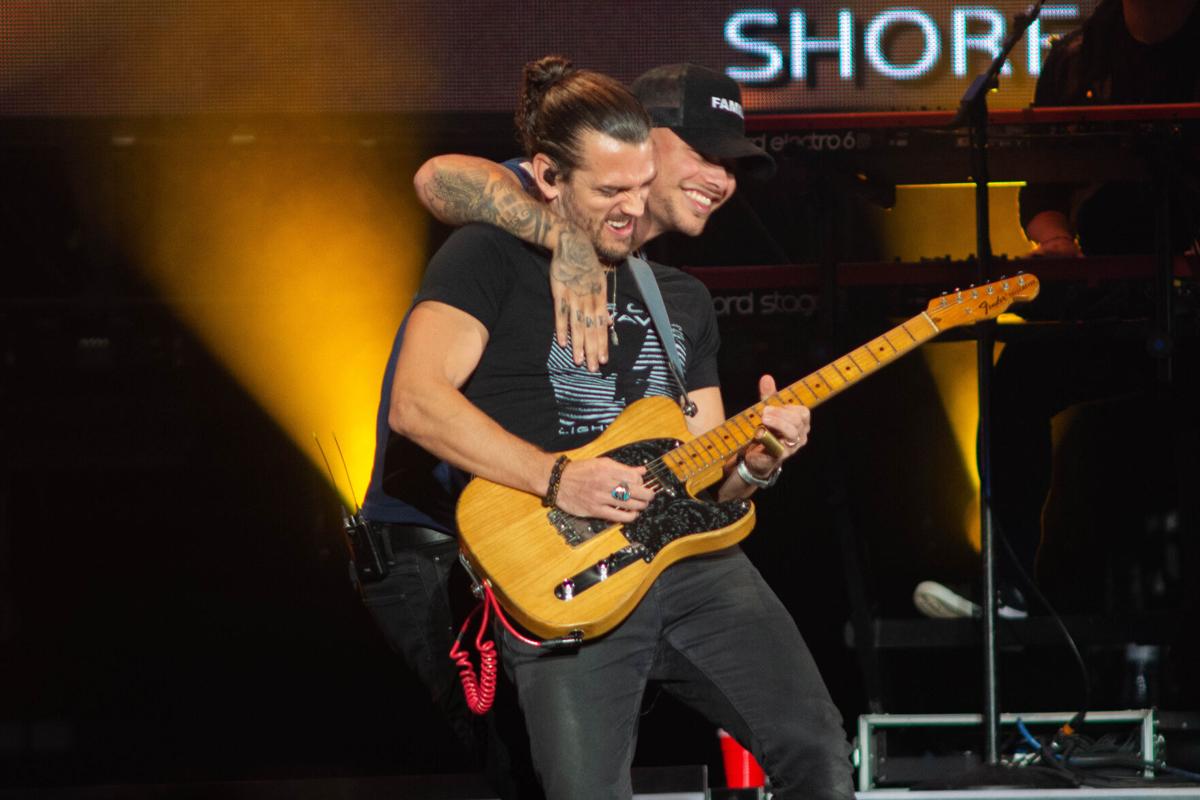 Kane Brown huga his lead guitarist while performing at the Bryce Jordan Center as part of his "Blessed & Free Tour" on Saturday, Nov. 6, 2021 in University Park, Pa. 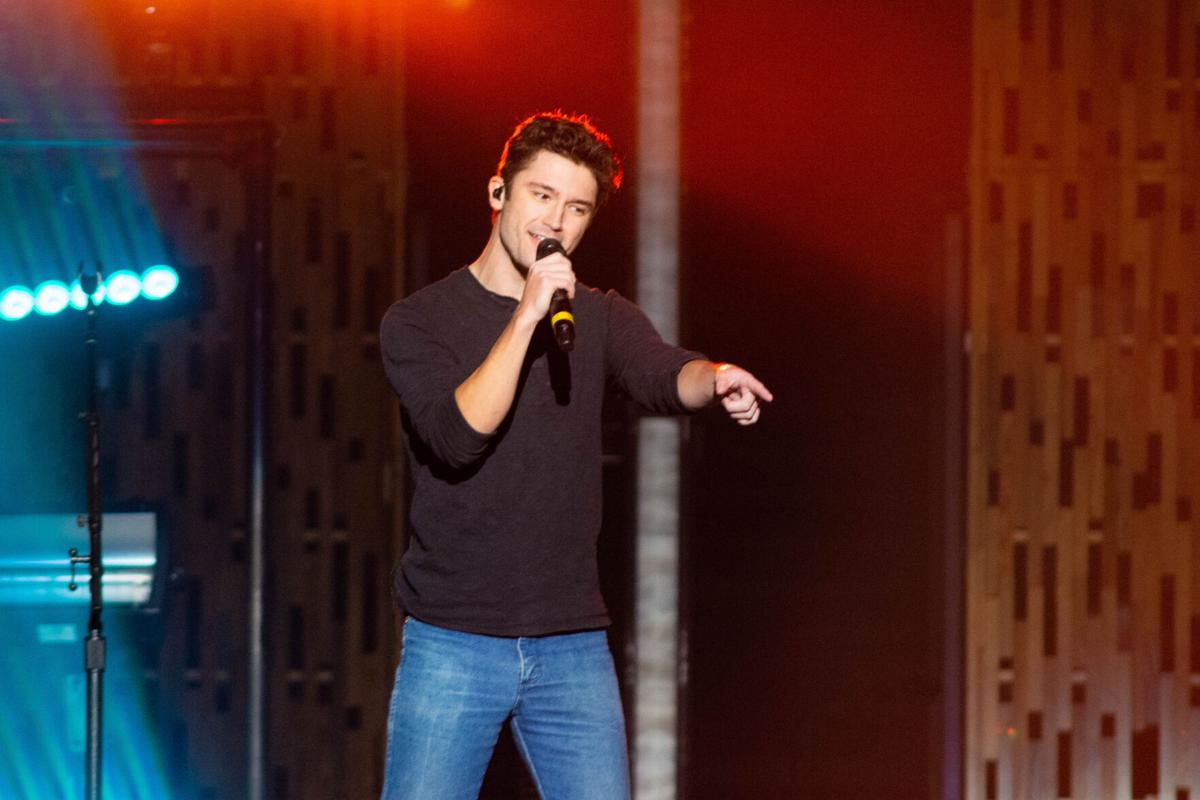 Lights, fire and beer — lots of beer. These staples of Kane Brown’s Saturday night installment of his “Blessed & Free Tour” dazzled — and soaked — the throngs of thousands who packed into Penn State’s Bryce Jordan Center.

The performance kicked off with Nashville-based country band Restless Road taking the stage and performing more than a half dozen original songs, including a rendition of John Denver’s “Take Me Home, Country Roads” — a cover the band wrote with Kane Brown.

Restless Road proceeded to film a TikTok with audience members, inviting them to lift their beers and dance with those around them. The TikTok, they said, would be a commemoration of the band reaching two million followers on the popular social media platform.

Before leaving the stage, the band took numerous selfies with the crowd around them, inviting members of the audience to send them selfies to a phone number they displayed on the screen for the occasion.

DJ Jevity, the brother of Kane Brown, took the stage once Restless Road left, playing several remixes of popular songs and speaking to the audience slightly about his relation to the country superstar who would take the stage later in the night.

In Davis’ repertoire was a mashup song featuring the verses of a popular Tom Petty song juxtaposed with the chorus of “Levitating” by Dua Lipa. This quickly proved to be a crowd favorite.

As Davis wrapped up his performance about an hour later, the singer expressed his excitement and gratitude for the audience.

“This is by far lining up to be the best crowd on the whole ‘Blessed and Free Tour,’” Davis said as he left the stage.

An intermission followed Davis’ performance, during which several members of the audience got up to buy concessions and beers.

Then, at precisely 9:26 p.m., the BJC went dark and the stage lit up in rainbow colors, switching rapidly from red to blue to orange to green, then settling on blue. “Stay” by Justin Bieber and The Kid LAROI began to play, and audience members began to sing along in anticipation of the performance to come.

A minute later, seemingly every light on the stage erupted in a harsh glow, painting the BJC white as multicolored lasers drifted around the room. Large pillars of flame exploded on stage, and then, suddenly, a lone figure wearing a Penn State football jersey drifted down from the rafters on a rope — Kane Brown had made his entrance.

The country singer launched into a performance of “Pull It Off," which ended in rapturous applause.

Brown led the “We Are” chant, and the replies thundered in echoes around the room.

He proceeded to play “Short Skirt Weather” — a sing-a-long with lyrics displayed on the large screens behind the mainstage. Piano, guitar and fiddle solos punctuated the performance.

“Cool Again,” “Hometown” and “Lose It” performances followed, and pyrotechnic explosions supplemented the third to ear-shattering cheering and screaming.

After “Lose It,” however, the room went suddenly dark again, and Brown reappeared in the center of the stage seconds later, flanked by two of his band members with guitars. He announced a storytime.

Yet more cheering and screaming filled the room at Brown’s announcement, and as he began to speak, the cheering continued. The singer spoke about his childhood and growing up in a Southern town in which he was one of very few people of color.

More ear-shattering applause reverberated around the room as he mentioned his triumphs in life, of overcoming racial inequality and becoming successful.

But when Brown mentioned his history of domestic abuse from his stepfather and his triumphs over a difficult family life, the response became deafening.

Brown launched into an emotional performance of “Learning,” which he followed with “Worship You.”

Following his performance of the latter, Brown spoke about his love for college football, which garnered the most deafening response yet.

A second storytime followed the first, in which Brown finished the story of his family discovery and mentioned his pride for DJ Jevity, who aided him with opening the show.

Once again, the emotions in the room rose as Brown launched into a performance of “For My Daughter” — a song he supplemented with videos of his daughter growing up and being a part of his life.

By this time, however, the crowd began to grow restless, seemingly tired of the emotional, slower songs Brown had just played.

Loud but broken “We Are” chants rose around the room, and Brown acknowledged them, promising the crowd a return to more upbeat music.

Performances of “Good As You” and “One Mississippi” dazzled the crowd with smoke pyrotechnics, video visuals and even a fiddle-guitar duel in the latter.

After “One Mississippi,” Brown paused and sang an a capella country folk song before launching into his third and final storytime of the night — this time, about his middle school years and the music he said shaped him.

As he neared the completion of his short spiel, the fiddle player walked on stage and began a loud, pizzicato beat that quickly turned into a cover of “Beautiful Girls” by Sean Kingston. And, as that song samples “Stand By Me” by Ben E. King, Brown launched into that, too.

Brown then covered “Crank That” by Soulja Boy, followed by “Hot Girl Bummer” by blackbear.

“Hot Girl Bummer” segued Brown into his song “Memory,” which features blackbear. A video recording of blackbear’s part played during the singer’s part.

Restless Road came out at the conclusion of “Memory,” and the band performed a song with Brown and Davis.

At the conclusion of the group performance, the room went dark again, leading some to believe the performance had ended. But about three minutes later, Brown reappeared and performed “Like A Rodeo,” a performance supplemented with lots of pyrotechnics and fire displays, synced to the beat of the song.

Brown then paused for another minute to recognize the veterans and service members in the room before dedicating his performance of “Homesick” to them.

At the conclusion of “Homesick,” the room went dark again, and Brown left the stage.

Many speculated once more that the performance had ended, but a couple minutes later, the stage lit up with a music video of “Blessed and Free,” followed shortly by a blazing display of lights that led into a performance of “One Thing Right” by Brown, which he followed with “Heaven” before ending on a performance of “What Ifs,” what he said was his first No. 1 song.

At the end of his singing performance, Brown stepped off the stage and greeted audience members, taking selfies and signing things for fans. He then got back on the stage and took a dramatic exit through the floor.

Student Emily Trapani said she “had a lot of fun” at the concert, this having been her first live performance in a couple years due to the coronavirus pandemic, she said.

“It’s been a rough two years,” Trapani (senior-public relations) said. “It was kind of like a sense of normalcy again.”

“It was a very good first experience,” Peterson (senior-supply chain) said. “Kane Brown did a great job relating to the crowd. It was great to see everyone come together and appreciate his background.”

“There’s not much to do if you’re not going to football,” Keister (freshman-nursing) said. “This breaks it up.”

But hosting such an event following the pandemic felt “wrong” for Cameron McCarthy.

McCarthy (freshman-accounting) and Keister both said being in a large, indoor crowd was a “weird” experience but one that “was pretty cool” after so long without such events.

For Peterson, the event was a reputation booster for the BJC and Penn State as a concert venue. Having a “big name” like Kane Brown come to the BJC will compel other “big name” artists to come to the BJC, too, he said.

Following his performance, Brown made an appearance at Champs Downtown in State College, where he met up with Penn State football quarterback Sean Clifford. The two addressed the crowd at the bar before dancing and partying with everyone.