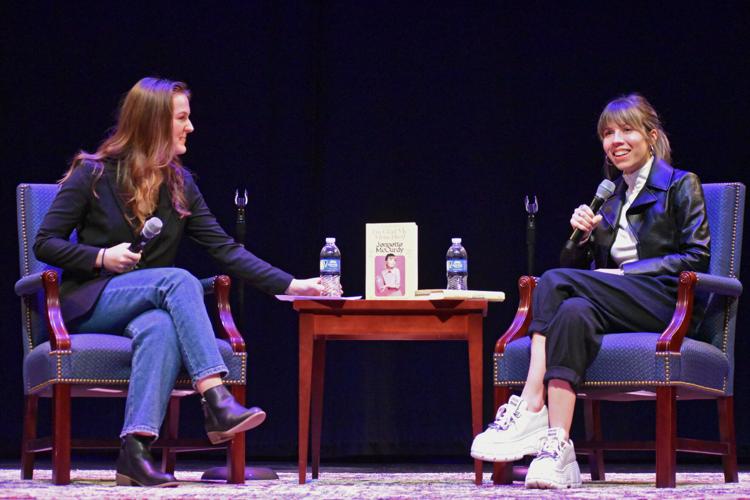 Jennette McCurdy sits down with moderator, Emily McGlynn (junior-broadcast journalism), during a lecture in Schwab Auditorium on Thursday, Nov. 10, 2022 in University Park, Pa. 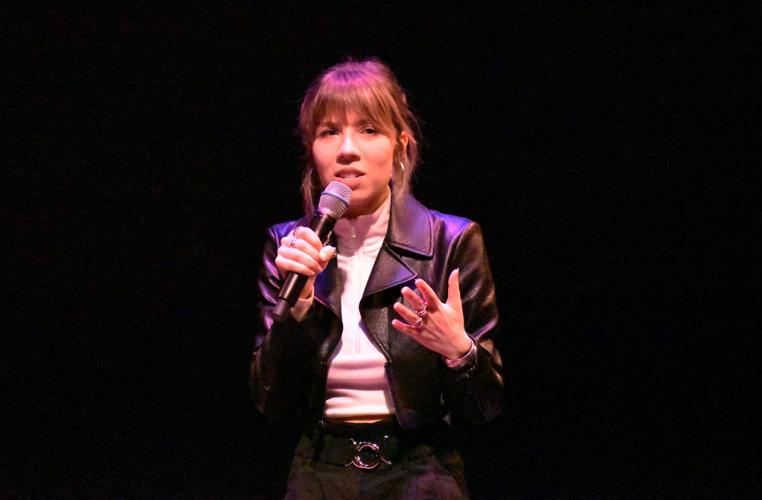 Jennette McCurdy answers questions about her book during a lecture in Schwab Auditorium on Thursday, Nov. 10, 2022 in University Park, Pa.

McCurdy began the session by reading an excerpt from her recently published memoir, “I’m Glad My Mom Died,” which held the No. 1 spot on the New York Times bestseller list for eight weeks, according to a SPA release.

During her conversation with McCurdy, moderator Emily McGlynn thanked McCurdy for being “vulnerable” and for sharing experiences that are “hard” to talk about.

“Not for me,” McCurdy said in response.

She said she worked through her “traumatic experiences” in therapy prior to writing her novel and that the experience was “fulfilling."

McCurdy said she took inspiration from “The Glass Castle” by Jeannette Walls while writing her book.

“My life has never been one way more drama or more comedy,” McCurdy said about sharing her trauma in a “funny” way in her book.

According to McGlynn (junior-broadcast journalism), the title of McCurdy’s memoir was controversial.

“I stood by the title because it was something that I wanted to say,” McCurdy said.

An audience member asked McCurdy about her experience playing the role of Sam on “iCarly,” which was only briefly addressed in her memoir, according to the audience member.

“I feel like there are more important things to talk about,” McCurdy said. She added that she would rather share things that are “valuable” and “compelling to [her] mind.”

“Doing childhood TV was traumatic for me, but that does not take away from the joy that it brought other people,” McCurdy said.

Aside from answering personal questions, McCurdy gave advice to aspiring writers and film producers in the audience.

She said she loved that audience members were given the opportunity to ask McCurdy questions.

“The students asked most of the questions that I had in mind, so that covered a lot of things I was curious about,” Al Shirawi said.

Presley Dougherty also grew up watching iCarly and said they bought McCurdy’s book as soon as they saw it in stores.

“Jennette is such an eloquent speaker,” Dougherty (senior-mechanical engineering) said, adding that McGlynn was a “wonderful” moderator and asked “insightful” questions.

Dougherty said their biggest takeaway from the event was, “No matter where you find yourself in life, you can reclaim yourself.”

“I am now on a path that I am so grateful for and [that] has been so fulfilling, and I do wonder if I would be on that path if it weren’t for the other one,” McCurdy said. “In that sense, I do feel grateful for the trauma.”

According to McCurdy, her biggest piece of advice for audience members in their late teens and early 20s is: “If it’s not a 'hell yes,' it’s a 'no.'”

The Oriana Singers Treble Choir joined Penn State in 2005, and its members have been singing…

International students came together to sing, eat snacks and socialize at Penn State Bridges International’s Karaoke Night at the HUB-Robeson …