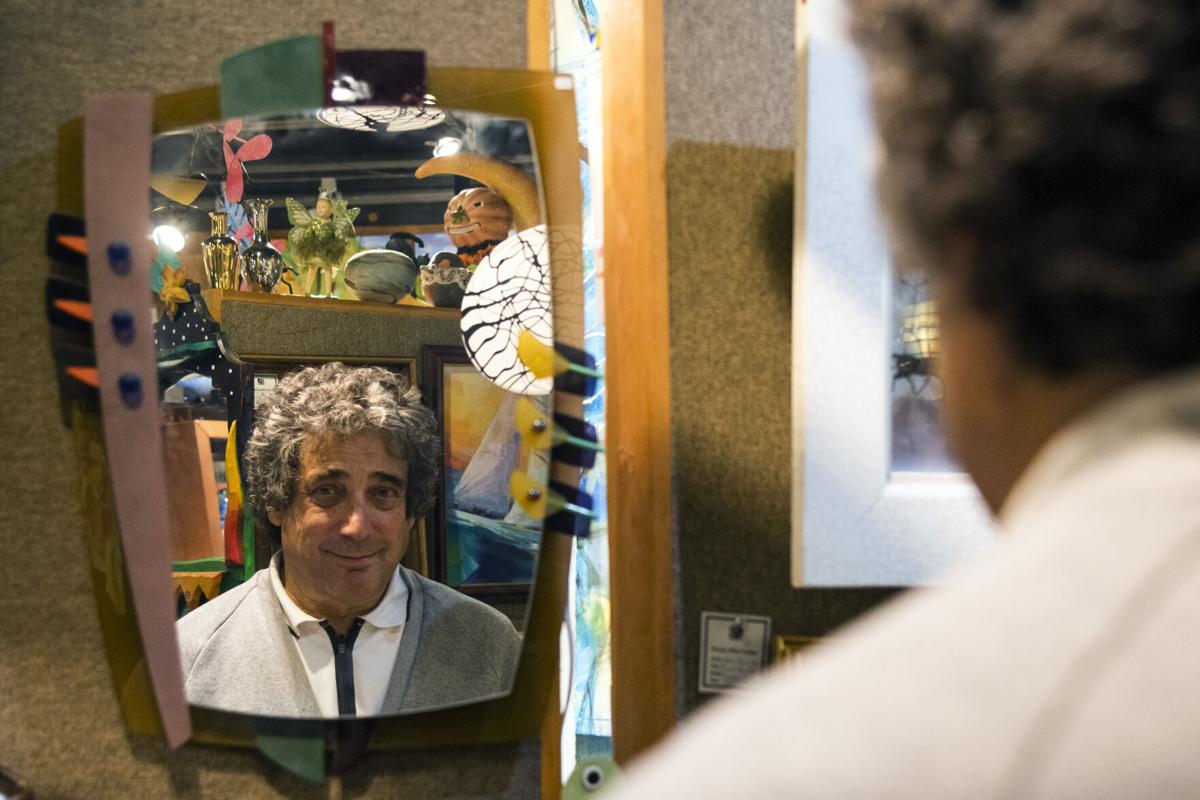 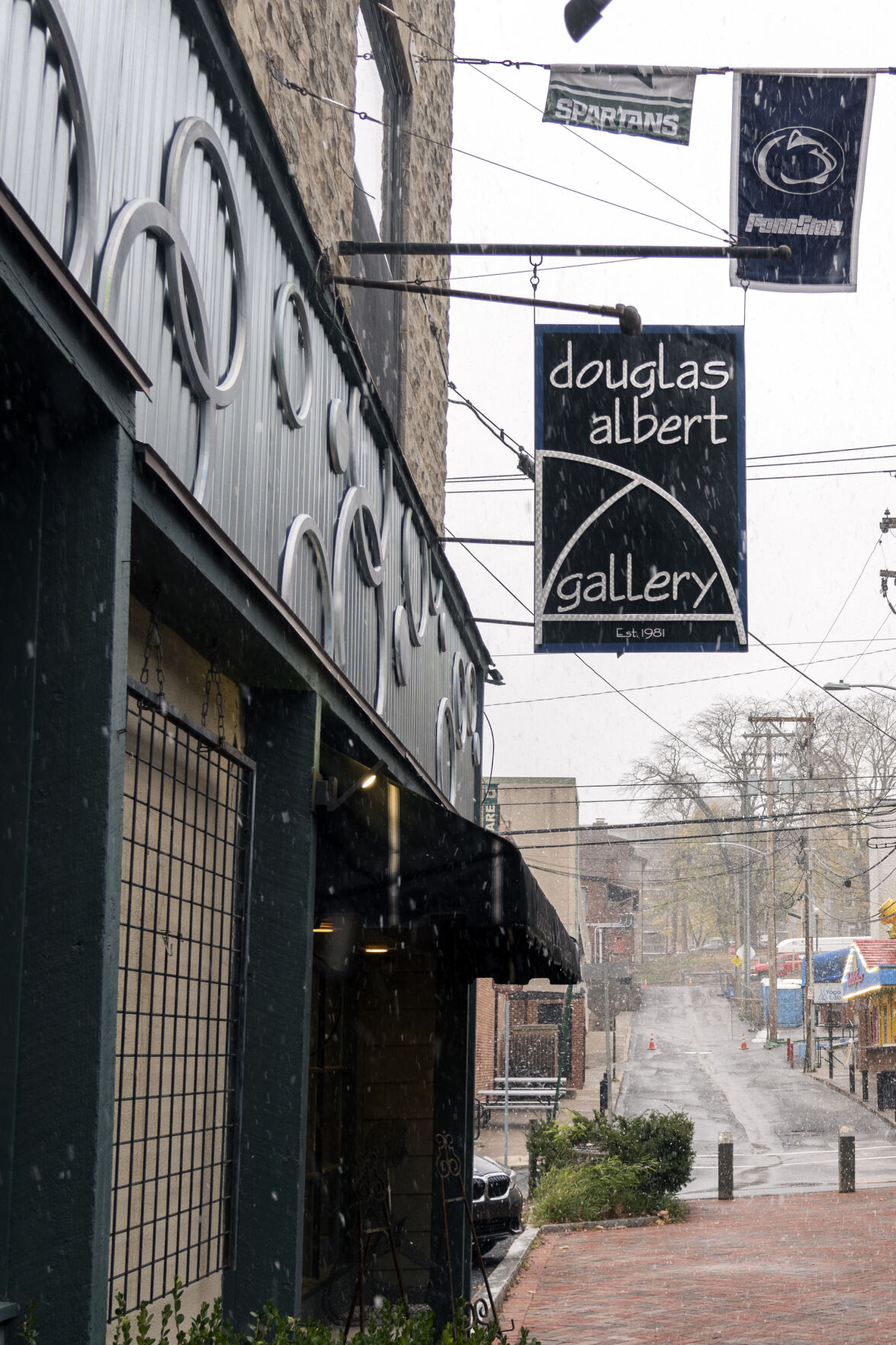 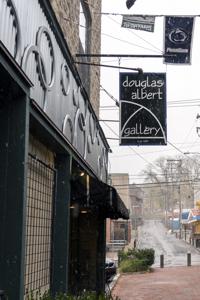 The sign outside of Douglas Albert Art Gallery in downtown State College, Pa., as shot on Tuesday, Nov. 17, 2020. 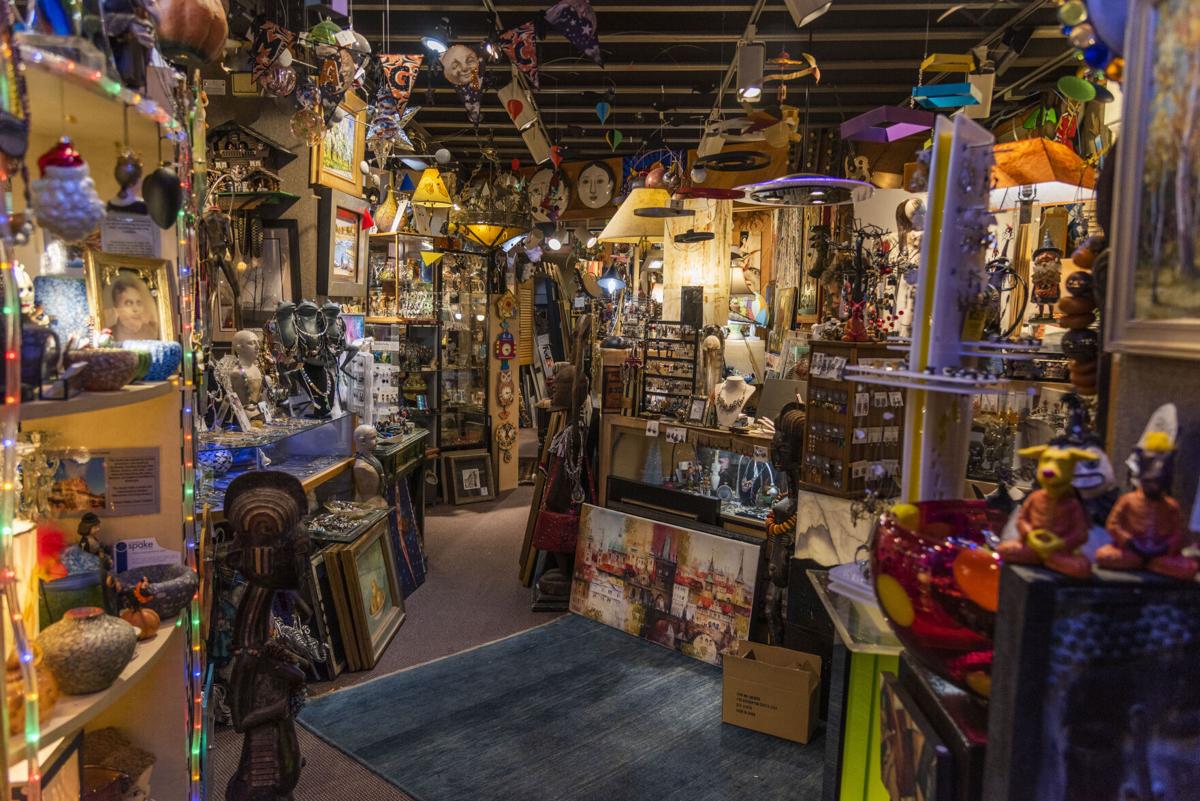 The inside of Douglas Albert Art Gallery in downtown State College, Pa., as shot on Tuesday, Nov. 17, 2020. The store was bought in 1981 by Douglas Albert. 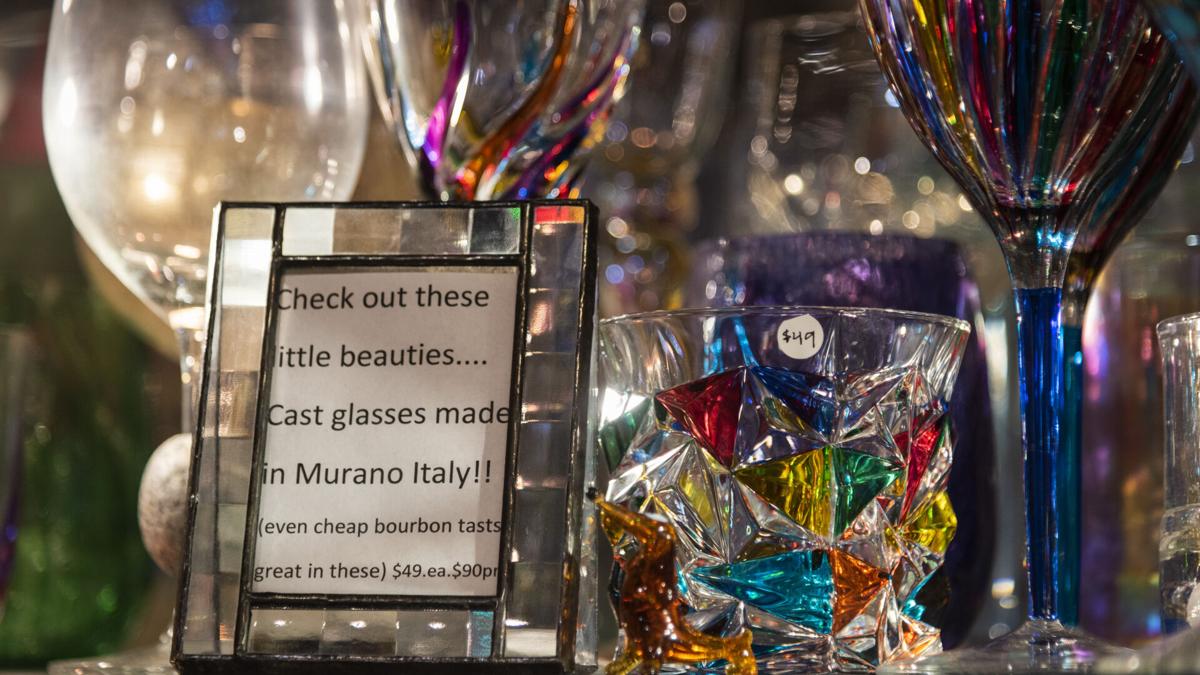 Colorful glasses on the shelves inside of Douglas Albert Art Gallery, as shot on Tuesday, Nov. 17, 2020. 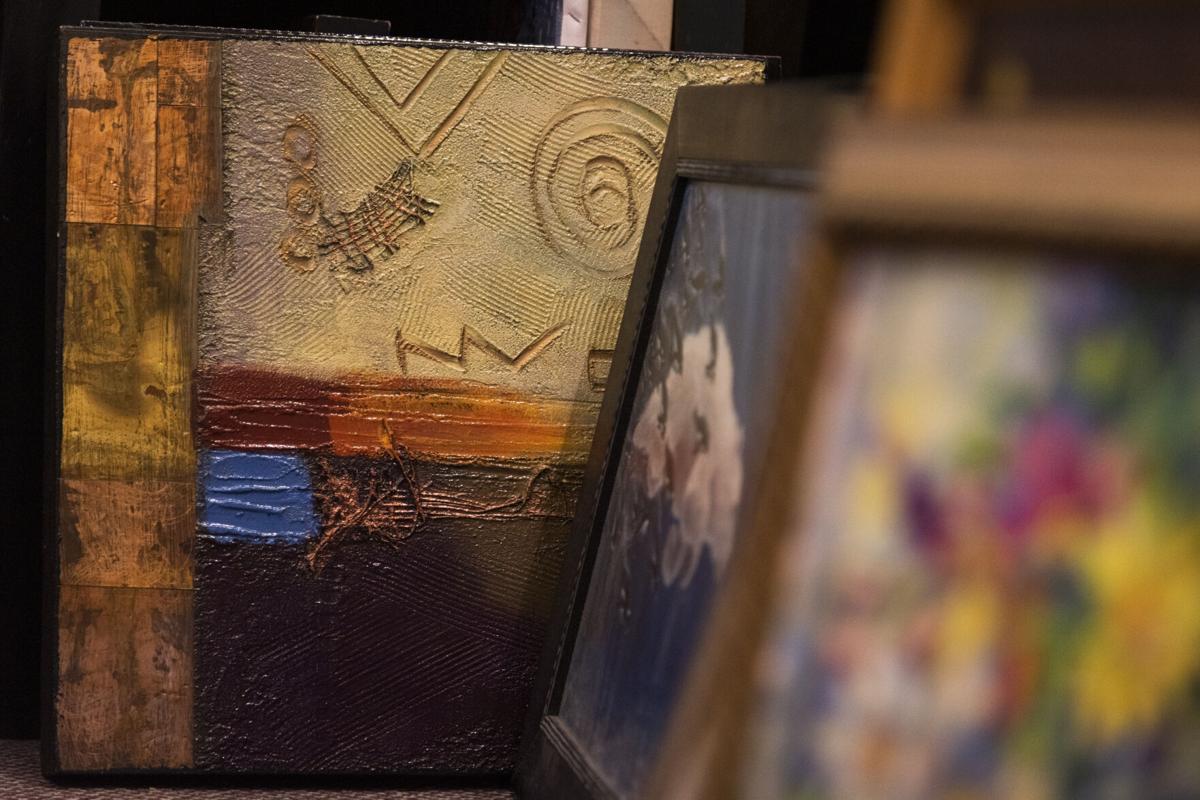 Paintings on the floor inside Douglas Albert Art Gallery, as shot on Tuesday, Nov. 17, 2020.

Tucked away on McAllister Alley in downtown State College, you will find the Douglas Albert Art Gallery, a tiny shop filled to the brim with countless art pieces, sparkling jewelry and chirping cuckoo clocks. Amid all the chaos is Douglas Albert himself: the master of it all.

Albert’s treasure trove of art has been a staple in State College since 1981, and the gallery can completely immerse customers in Albert’s world.

“It's definitely an experience just to go in the store,” Lauren Godfrey, a local interior designer who works with Albert, said. “I have spent hours there just getting lost, and I feel like I've only scratched the surface of what he has there.”

However, with the ever-changing State College economy and the coronavirus pandemic hindering travel to the area, Albert fears even more local businesses will start to shut down — including his own.

When he was just 20 years old, Albert opened Uncle Eli’s Artist Marketplace and Frame Shop in 1970, beginning his career as a State College businessman. Operating in the midst of the Vietnam War, Albert had no knowledge of business and zero inventory, learning as he went and moving the store five times until it finally settled on Beaver Avenue in 1975.

According to Albert, Uncle Eli’s is now the longest-standing business in downtown State College still in operation under the original proprietor.

In 1981, Albert received the opportunity to transform what was once a modest ski station into the Douglas Albert Art Gallery on McAllister Alley.

Albert said the transformation was not an easy task. He added that the alley was not even a brick walkway yet, and trucks making deliveries to The Tavern restaurant would constantly knock down Albert’s sign in the front of the gallery.

Albert also keeps in mind that not everyone wants to spend a lot of money, so he tries to procure art pieces at a variety of prices so anyone can find something to purchase at his gallery. According to Albert, he supports a couple hundred artists and studios.

“I've always tried to bring the outside world in, rather than deal with locals,” Albert said. “I have nothing against local artists — I've shown them over the years — but they have plenty of other opportunities up until now to really get their work out.”

Albert said he makes a huge investment in his inventory to provide customers with art that is unlike anything they could find anywhere else. And, according to some of his most loyal customers, that’s exactly what he does.

Former Senior Vice President of Finance and Business at Penn State David Gray and his wife have been buying art pieces from Albert since 2012.

Gray said Albert introduced him and his family to “phenomenal” art made by international artists from around the world, which is now on display in the Grays’ home.

“You're not going to find the kinds of things that Douglas has for sale at Target, Kohl's, Walmart or any other place really,” Gray said. “And that's part of what I think makes his presence downtown so special.”

Albert values his relationships with his clients and remains good friends with Gray’s family.

According to Gray, people should visit the Douglas Albert Art Gallery because it is a “real little hidden gem, right in downtown State College, easy to get to, and they're never going to find a more hospitable person [and] shop owner than Douglas.”

For Godfrey, her collaborative working relationship with Albert and his access to “one-of-a-kind pieces” only enhances her interior design business. His “incredible” expansive art knowledge helps her create the appropriate ambience for her clients’ homes.

“He just has a Rolodex in his mind of everything he has in his shop, and then [he] also [knows] artists [and pieces] that might go with the mood that I'm trying to create, so Doug’s an amazing resource,” Godfrey said.

Albert also tries to give back to the State College community, frequently donating to local charities like Centre County PAWS, the Connoisseur's Dinner and Centre Safe. He said he wants people to know the Douglas Albert Art Gallery is part of the community.

However, even with his efforts, Albert worries that customers are no longer interested in visiting his store with the shift to online shopping.

“There is a world beyond Amazon, Etsy, and eBay. And people have to understand… you have to support local businesses or they won't be around,” Albert said. “It's obvious what's going on downtown here. It's frightening. It scares me. But, I think, when the dust settles, there'll be a rebuilding and State College will be a shopping hub like it was ten years ago.

“People used to come from all over, because there were nice stores here. I hope I'm still here, but who knows.”

Brian Cohen, owner of Harper's Fine Clothing Store, has known Albert for nearly three decades and operates his own store a few steps away from Albert’s gallery.

Cohen said State College is lucky that it is a destination community with people coming from all over the country to visit the college town, because he thinks this helps local businesses.

However, since there has not been much foot traffic or out-of-town visitors to State College recently, Albert said local businesses have been suffering.

Albert said he thinks there will not be a lot of business growth in State College for a while. He said 80% of his sales go to out-of-town visitors, so without as many conferences, parents visiting, people touring Penn State or in-person football games, business has become more difficult.

Albert doesn’t frequently use social media, and he admits that he is a “bit old-fashioned” when it comes to having an online presence. However, he said visiting the gallery is a “visceral experience” that will keep customers coming back.

He also said since many people are home more often than usual, they have started to realize they want to change what they have hanging on their walls, which has helped his business during the pandemic.

Albert added that great art can “stand the test of time.” And so far, he said no one has ever brought a piece of art back to the Douglas Albert Art Gallery to return.

“When I go home, I never get tired of looking at the artwork that I have hanging on my walls, so you know it's not supposed to be decorative all the time.” Albert said. “It should speak to you. The dividend that you get from a nice painting — I believe the joy it gives you every time you look at something that you really love — it pays you back for what you pay for.”

Sitting next to the bustling Forum Building, the Palmer Museum of Art typically serves as an artistic space for the Penn State community to ex…

Ava Leone is a lifestyle features and investigation reporter for The Daily Collegian. She is a junior studying digital and print journalism with minors in English, Spanish, and civic and community engagement.