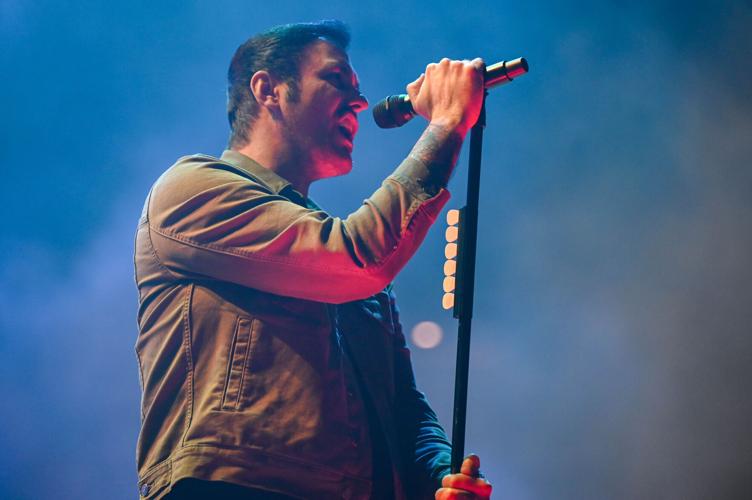 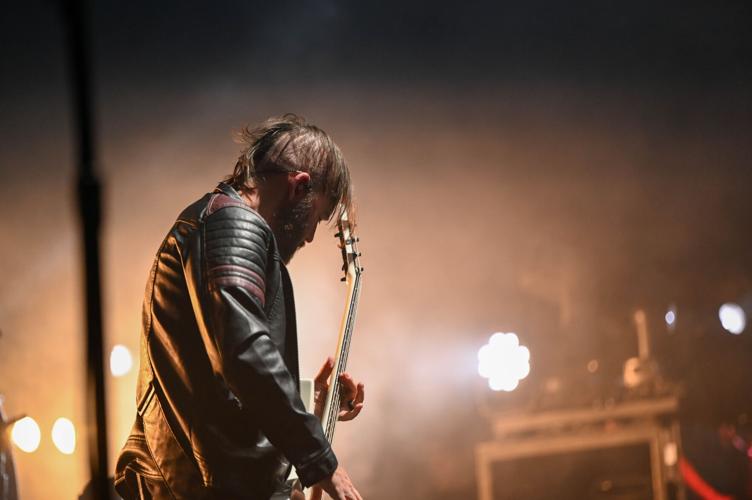 Bassist Corey Lowery of Seether, Patrick Callahan during there concert with Breaking Benjamin at the Bryce Jordan Center on Wednesday April 27, 2022 in University Park, Pa.

Fronted by lead singer Benjamin Burnley, Breaking Benjamin has been playing music since 1999 and is originally from Wilkes-Barre, Pennsylvania.

State College is the fourth stop on the band’s tour across the U.S.

Sturm opened the concert with a simple acoustic set, singing alongside her husband Joshua on guitar.

The couple’s set included several original songs and a cover of “Roxanne” by The Police.

At several points in the set, Sturm addressed the audience about her experiences with death, love and God.

After just a few minutes, Starset took the stage next, clad in white cloaks and small lights on their temples.

The band played on a stage flooded with fog, which helped to disperse the bright colors of their lights throughout the stadium.

Behind Starset, a large screen played visuals and lyrics, and a massive banner with the Starset logo hung over the entire stage. The band was also flanked by multiple flags, which the band members waved and threw down throughout their set.

Concert attendee Ethan Wilt said he enjoyed Starset the most out of the other bands.

“I was super impressed with Starset’s entire performance and the whole show they put on,” Wilt said. “I really enjoyed “Carnivore,” the first song of their set. It really set the stage. It was really hype.”

After a lengthy sound check, Seether took the stage promptly at 8 p.m.

The stagehands cleared much of the equipment off of the stage between sets, giving the standing members of Seether plenty of room to run across the bare set.

Overhead, lights flashed patterns across the stage and audience, creating a visual experience for audience members sitting in the raised stands.

Lead singer Shaun Morgan gave a shoutout to the bands preceding Seether and Breaking Benjamin then ended the set with “Remedy." The band members threw their picks and sticks into the crowd before leaving the stage.

A little while afterward, Breaking Benjamin emerged onstage to roaring cheers and applause.

A textured wall hung behind the band, evoking the rocky face of a cliff side. A huge light projected the band's logo onto its surface for the entire duration of the performance.

Drummer Shaun Foist sat on a raised platform, consisting of several steps mimicking the shape of a pyramid.

The lighting at this point in the concert was at its most intense with spotlight beams flashing everywhere, lighting up the entire stadium. While many colors flashed throughout the set, red was the most prevalent.

Midway through the set, Burnley invited Starset’s lead singer Dustin Bates to join in singing “Breath” with the band.

“We love you, and we just want you guys to have a good time tonight,” Burnley said.

He later took a moment to pause the set and talk about his love for State College and how he spent lots of time there when he was younger and wanted to unwind.

The band closed out the set with its hit “The Diary of Jane.” A few minutes after, Burnley and the rest of the band came back out for an encore of “Rain” to end the night.

Chris Babylon said the encore was his favorite part of the concert, as it started with only an acoustic guitar and Burnley’s vocals then later incorporated the entire band.

“I think it was really cool that they did the [acoustic] encore, and they did the full-band version, which I was not expecting,” Babylon said.

Jacob Chilcoat said he was happy to be back at a concert after the coronavirus halted large gatherings like concerts for over a year.

“It’s the first concert I’ve been able to get out to in about two years, and I missed it,” Chilcoat said.

Last week in State College, we saw snow in April, which can only mean one thing — we have a …

Penn State is home to a range of songs that are instantly recognized by students. Found in Penn State playlists across Spotify, these songs — …

If you’re reading this, there’s a good chance you’re a newly minted Penn State student in the class of 2026. Congratulations!