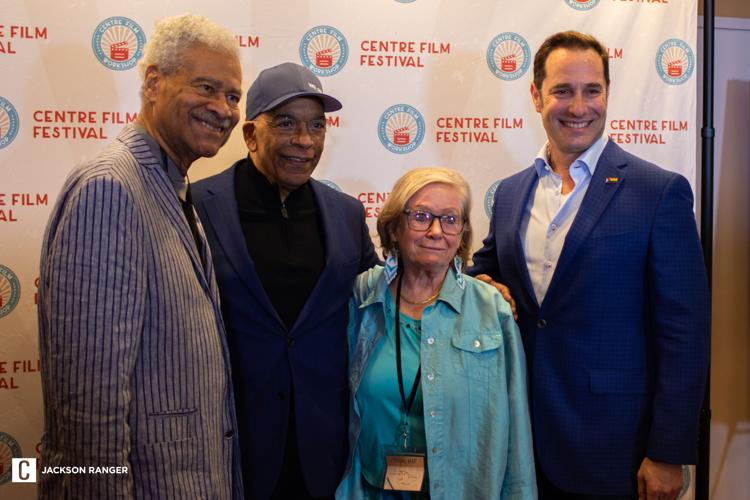 From left to right; Charles Dumas, Stan Lathan, Jo Dumas and Ezra Nanes on the red carpet at the State Theatre during the award ceremony for the Centre County Film Festival on Sunday, Nov. 6, 2022 in State College, Pa. 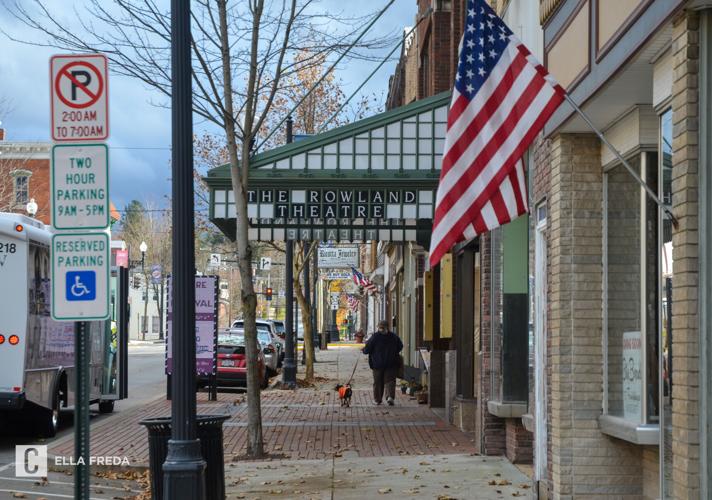 A woman walks her dog in front of the Rowland Theatre where the 4th annual Centre Film Festival is taking place in Philipsburg, Pa., Saturday, Nov. 5, 2022. 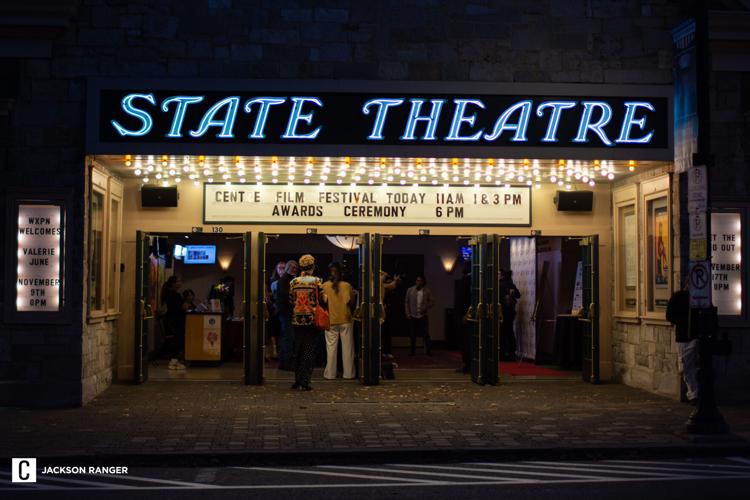 The outside of the State Theatre during the award ceremony for the Centre County Film Festival on Sunday, Nov. 6, 2022 in State College, Pa.

Filmmakers and aspiring filmmakers from all over came to Centre County this fall for the fourth annual Centre Film Festival.

From Oct. 31 to Nov. 6, many different films were shown at both The State Theatre on West College Avenue and the Rowland Theatre in Philipsburg. Filmmakers, producers and actors were in attendance throughout the festival.

It also gave local high school and university students the chance to get involved with the festival on different levels, and showcase their skills — whether that be in film, writing, photography or public speaking.

“What this has meant to me is an opportunity to meet a bunch of filmmakers, and also just immerse myself in watching independent films,” Anabelle Preciado Higgins (freshman-film production) said. “It’s also just been cool spending time in these theaters… this particular theater [Rowland] is very beautiful.”

An aspect of the films shown throughout the festival is their ability to provide social commentary and transparency on current issues. One such film was “Klondike”, a Ukrainian film set during the Russo-Ukrainian War in 2014.

Mykyta Kozlov, assistant director of the film, talked about how “Klondike” presents an opportunity to engage the American audience with the themes of the film: the war in Ukraine and to show the perspective from the families during that war.

“We need to find new ways to expose people to the issue that is going on in my country,” Kozlov said. “Film can be the most powerful way to do that.”

“Klondike” was among the many films that received recognition at the awards ceremony on Sunday, including other short-films and documentaries.

The ceremony at the State Theatre concluded the festival with speeches from different special guests, live music and spoken word poetry from the Writers Organized to Represent Diverse Stories (W.O.R.D.S.).

One of these awards was the Chandler Living Legacy Award, for the documentary film, “Of Medicine and Miracle.” Following the story of Emily Whitehead, a leukemia survivor, the film shows the support of her parents and a doctor with an experimental cancer treatment.

Emily’s parents, Kari and Tom, were in attendance. They are co-founders of the Emily Whitehead Foundation and Philipsburg residents.

“To be given an award like this is amazing because our family has worked on this film for over eight years, so it’s just a blessing,” Tom said. “It’s something our family will never forget.”

They took the stage with Emily to accept the award.

The award’s name is in memory of Curt Chandler, a professor at Penn State’s Donald P. Bellisario College of Communications, who died in January, due to pancreatic cancer. He was also involved with the film festival since its founding in 2019.

Pearl Gluck, a filmmaker and a screenwriting and directing professor at Penn State, is the co-founder and artistic director of the Centre Film Festival. She helped organize the event and emphasized the collaboration it takes to do so.

“This year, we are honored to have a number of films from around the world that I believe make it possible for us to start calling ourselves the ‘International Centre Film Festival,” Gluck said in a speech to the audience. “This festival could not happen without our partners… we’re so grateful to each of you.”

Stan Lathan, a film and television director, producer and Penn State alumnus, was invited to the ceremony to accept a “Lifetime Achievement Award.”

Lathan graduated from Penn State in 1967 with a bachelor of arts in theater, and talked about the impact Penn State had on his life, how it prepared him for his career and shared some advice to students in the audience during his acceptance speech.

Jason Browne, a Penn State alumnus and public speaker, was one of the award presenters during the ceremony.

“The fact that the Centre Film Festival and Gluck were able to honor [Lathan] in such an honest way, and I was able to help with that… it’s a blessing,” Browne said. “I am humbled to be involved, to have shared the stage with [Lathan], and with all of those filmmakers who are creating such an impact.”

Student participation and collaboration for these types of events also helps to build a stronger bond for students and alumni, according to Browne.

“It’s not just about a performance, it’s not just about the flashing lights… [Lathan] accepted an award to come back into a town which he’s had mixed experiences with, and share the stage with some of us, and give back to the communities that built him up in the first place,” Browne said. “It is the responsibility of student groups when we have an opportunity like this in town to pack places like this.”

While some Penn State students are looking for relaxation during this point of the semester,…

The Downtown State College Improvement District (DSCID) will host its third annual Light Up Night on Nov. 17 from 5-8 p.m. at the 100 Block of…

With only two weeks left of classes before fall break, students across Penn State are anticipating all of the food they’ll eat this Thanksgiving.