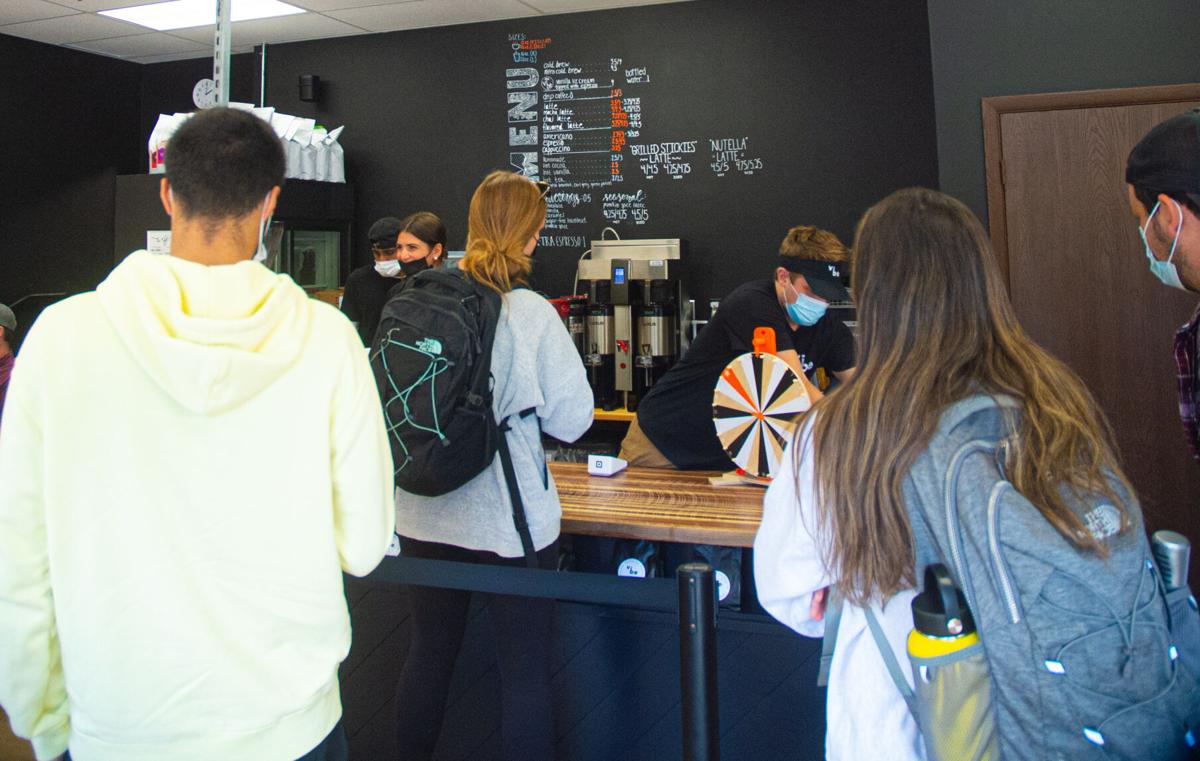 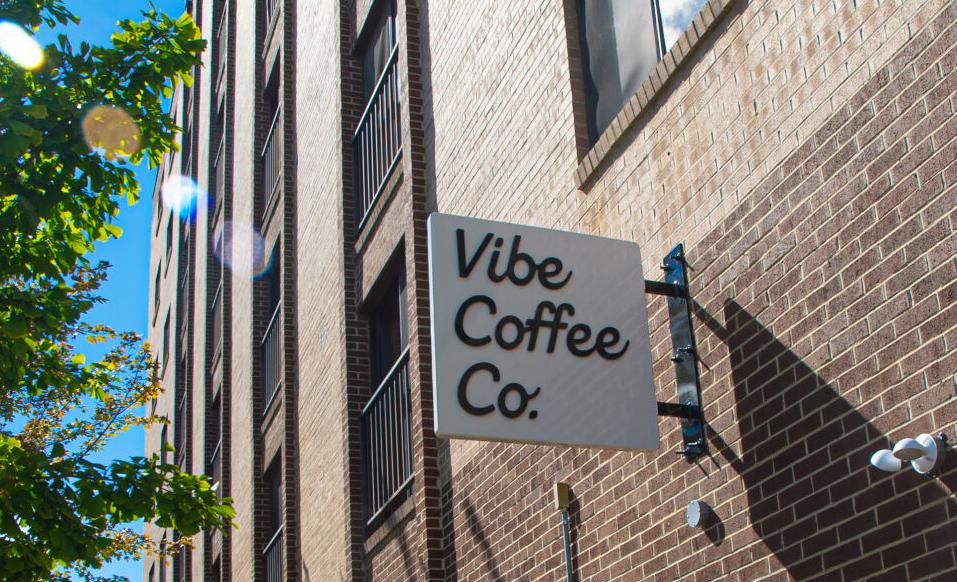 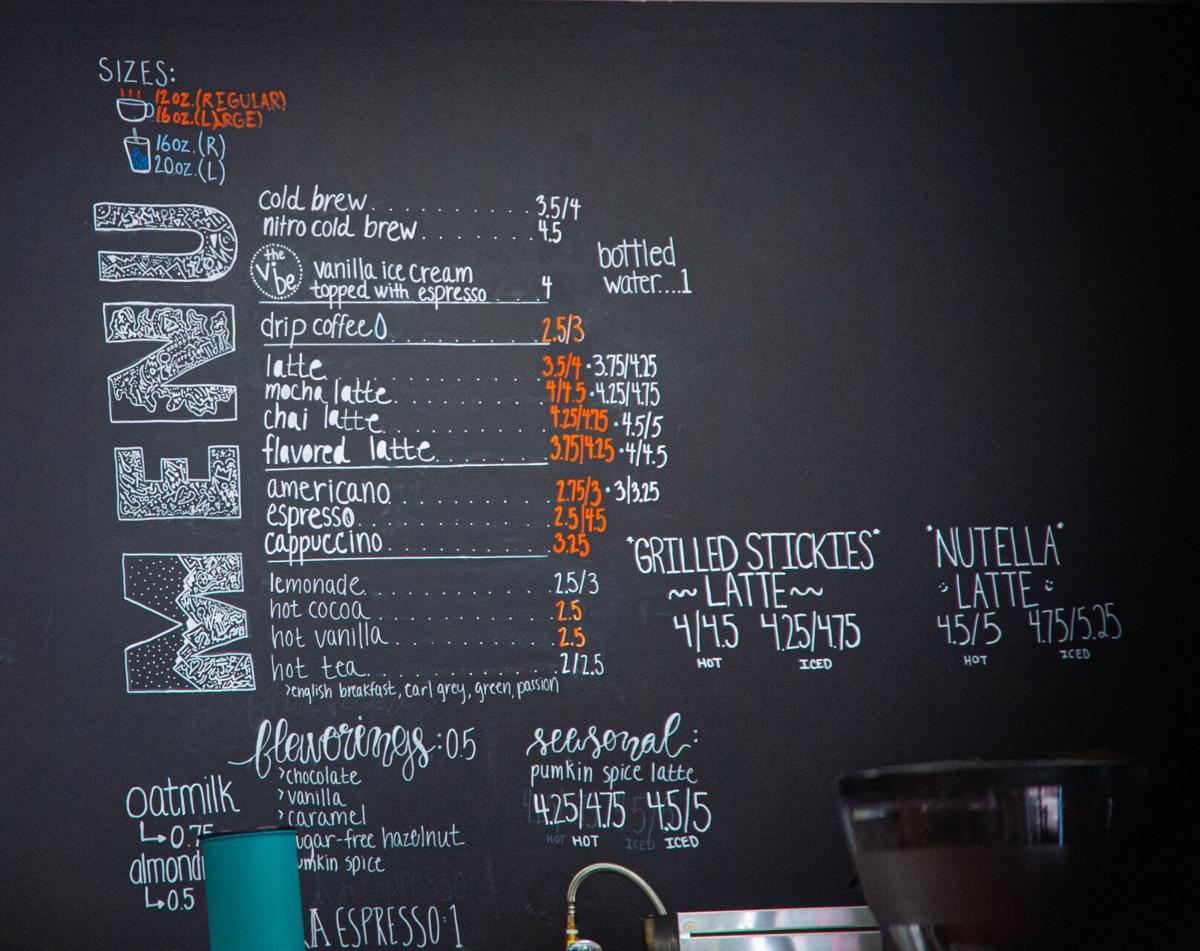 Ethan Steiger and Tabeel Noel are the owners of Vibe. They met in eighth grade in school near their native Philadelphia area. Though they would go on to attend different universities — Steiger went to Penn State and Noel to Temple — the two have gone in together on this newest project.

According to the pair, after they became friends, they could frequently be found in the various coffee shops of Philadelphia, where they enjoyed the unique atmosphere of each one.

“We would plan our daily agendas around what coffee shops we wanted to hit that morning,” Noel said.

After Steiger graduated last fall with a degree in marketing, he began to search for jobs. Noel, who graduated this summer with a degree in business administration, was working as president of his family’s transit company in Philadelphia, Best Transit.

But discussions about their own potential business, before hypothetical and far-off, became more realistic, and the two began to genuinely plan the initial stages of Vibe, Noel said.

“[Steiger] said he would be a lot more interested in doing a coffee shop and following his dreams rather than [working] a nine-to-five,” Noel said.

Originally, the pair wasn’t sure whether to focus their search in State College or at home in Philadelphia, Steiger said.

“We thought that State College would yield the most potential in coming up with something new, fun and unique,” Steiger said.

At first, Steiger said he wanted Vibe to be a bit more distant from downtown State College, but plans soon changed. He noticed the open space on West Beaver, and he soon began to discuss a lease agreement.

Steiger said he wanted to bring the feel of a big city coffee shop to a growing borough of State College. He said the interior of Vibe is meant to feel “modern, touristy and industrial.”

Much of the furniture in the shop, he said, was found on Facebook Marketplace, and the wood paneling found on one wall of Vibe was reclaimed by he and Noel.

But there’s also business to consider. Noel said their backgrounds in business and marketing have helped with the “management” and “logistics” aspects of their new shop.

Also proving invaluable, Noel said, was his mother, who immigrated from Pakistan and began Best Transit in 2008. He said the pair would frequently call her for advice on starting up.

“She was able to help in pretty much any capacity,” Noel said.

Also employed at Vibe are seven baristas. Steiger said many are students he knew prior to Vibe’s grand opening. Others, he said, just stopped by to inquire about jobs as he and Noel constructed their shop throughout 2021.

Samantha Muntzer was one of those inquirers. She said she was walking in the area where she saw the owners prepping their space and stopped to ask about a job.

“I think the most important part of my job is connecting with the customers and just really maintaining a positive atmosphere at work,” she said.

Muntzer said she is already beginning to learn some customers’ names and notice frequent passersby at a shop she said is “very personal to State College.”

“We already have regular customers that come in every day, and it’s only the third week of us being open,” Muntzer said.

But though it has roots in State College, Vibe sources its coffee from a rival city — Columbus, Ohio.

Spencer Hackett handles wholesales, education and training at Brioso Roastery and Coffee Bar in Columbus. A native of the city, he said he originally became interested in specialty coffee through the shop where he currently works.

Hackett said Steiger originally reached out to Brioso to learn about the coffee business and coffee-making techniques. But this conversation ended up leading to a partnership between the two companies.

Hackett said he doesn’t “have enough good to say” about the Mexican brew.

Present on Vibe’s opening day, he said the volume of customers who sought out the new shop was “impressive.”

“We kind of like to see it as a stepping stone out of Columbus,” Hackett said. “My objective is to bring Brioso to a broader audience, and having success stories like Vibe kind of helps us achieve that.”

Steiger said opening day on Sept. 16 was “insane” but also the culmination of months of work.

“With Tabeel and I kind of being locked in here for several months, it was really great to open the doors and literally see hundreds and hundreds of faces and get to talk to people,” he said. “It was a blast.”

It probably helped that Vibe opened two days prior to Penn State’s White Out against Auburn.

The customer reactions to Vibe, Steiger and Noel said, have been good as well. Noel said one woman offered the staff flowers during its grand opening, and Steiger said students had offered the staff pizza during late night hours.

Noel also mentioned that Rothrock Coffee and Sowers Harvest Cafe, two other nearby coffee shops, had offered the shop congratulations during its first day of business.

As for the name, Steiger said he and Noel, in school, used to rate the “vibes” of coffee shops, conversations and other things worth a rating on a scale of one to 10. They said they wanted to stick with the term for their new shop.

“We wanted to set the aesthetic and have a good vibe in the coffee shop,” Noel said.

And for the “vibe rating” for Vibe itself —

Last week, in my unending efforts to find the coolest, most hip coffee shop in town, I visit…

Walking through the open quad of West Halls, one can pass a number of traditional brick buildings forming a confined cluster of quaint residen…

Go to class. Do homework. Repeat. This is the perpetual routine many Penn State students find themselves trapped in each semester — eliminatin…