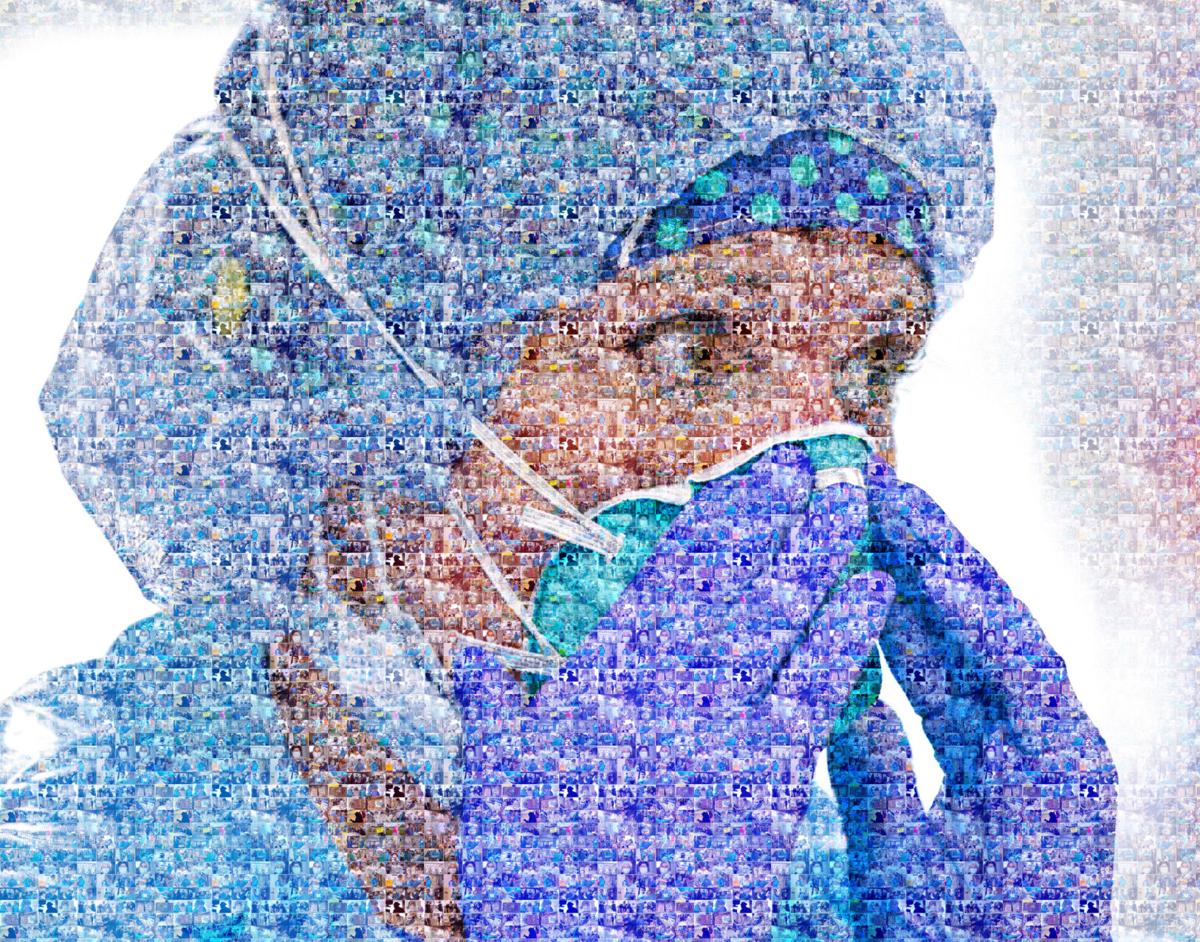 A total of 81 photographs of Penn State Health nurses make up the mosaic of Elena Konas, a registered nurse at Penn State Health Milton S. Hershey Medical Center, as she dons personal protective equipment before entering the room of a patient in the COVID-19 unit on Monday, May 4, 2020. 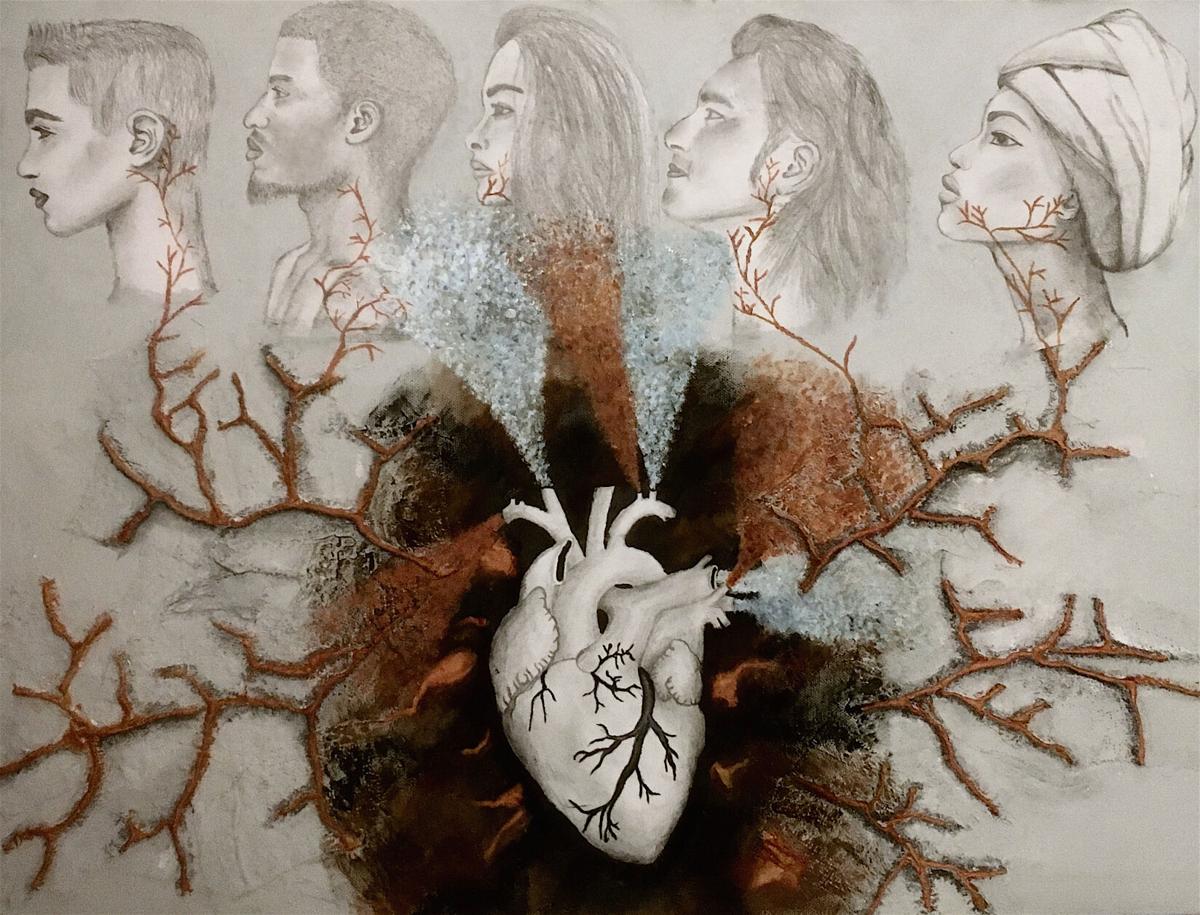 Knowing the impact the coronavirus has left and will continue to leave on the world, a group of Penn State professors came together to capture the individual experiences of Pennsylvanians during the pandemic through a creative lens.

Hausman, the chair of the department of humanities in the College of Medicine, said the idea for the project came about when Penn State’s Huck Institutes of the Life Sciences offered funding for coronavirus research.

Wishing to take advantage of the opportunity, Hausman reached out to Mekel, the assistant director of the bioethics program, to decide what kind of research they could do.

The two were interested in analyzing the media’s response to the pandemic, but Hausman said they wanted to branch from this slightly because with past pandemics — particularly the Spanish flu of 1918 — there have not been many accounts of people’s experiences via creative formats.

“In humanities, [creative works] are the things we study to make sense of the world,” Hausman said. “We’re trying to create documentary evidence so that when we look back we can say, ‘This is what happened and this is how some people responded.’”

Because of this, Hausman and Mekel said they started Viral Imaginations to provide current and former Pennsylvanians with a space to share creative works relating to their emotions and experiences regarding the coronavirus pandemic, as well as to set up an opportunity for researching the project in the future.

After the idea was decided upon, Dillard, a professor of communication arts and sciences, and Keifer-Boyd, an art education and women’s, gender and sexuality studies professor, became involved with the project. Dillard handles a majority of the site's data analytics, and Keifer-Boyd provides artistic insight and manages curation of submitted works.

Mekel said multimedia specialist Clayton Lose and web developer Benjamin Bryan, both of whom work for the College of Liberal Arts, have also helped with the project, taking on the graphic design and programming aspects of the gallery.

In addition to overseeing the website, student interns and outreach for Viral Imaginations, Mekel said she also helps with the curation of submitted pieces. She said the team does not look for a specific skill-level or quality in the works, but rather makes sure each one relates to the pandemic and follows the university’s values.

Seeing as the pandemic is ongoing, Mekel said the gallery will remain open for submissions for the foreseeable future. Even after submissions are closed, the website will remain live for people to view the works, whether it be for enjoyment or research.

The research aspect of the project does not have a set start time, but Mekel said the team is working to make the gallery as efficient as possible for future research by adding tags to each piece to improve site navigation.

With approximately one month of preparation, Viral Imaginations launched on April 27. Hausman said the project initially received significant participation, and Mekel added that the group was impressed that many different areas in Pennsylvania submitted pieces.

Nancy Adams, an assistant dean of the College of Medicine, is a participant in the Viral Imaginations project. Upon hearing about the gallery from Hausman, Adams said she decided to submit a poem she had written entitled “Poem for Connection in a Time of Pandemic: March 2020.”

“It was a way to get other people reading my poetry,” Adams said. “I knew that it would be preserved and available for the public to view.”

She said her poem portrays the many methods of online communication that have been sought out during self-quarantine and social distancing periods. She added that online connection is sometimes made to feel “cold and data-driven,” so she wanted to write a piece portraying it more naturally.

Adams said the gallery is a great way for people to express and share the ups and downs of their emotions during the difficulties presented by the pandemic.

Jason Plotkin, a photographer and videographer for Penn State Health, also submitted work to the project.

“I thought it was a really great outlet for people to channel what they are feeling as a result of COVID,” he said.

Plotkin submitted a two-dimensional art piece entitled “Mosaic of Bravery and Heroism,” which utilized 81 photographs of nurses — all of whom have helped fight the coronavirus — to create one image of a nurse’s face.

Plotkin added that he created the mosaic on National Nurses Day, May 6, and wanted to give medical workers and their hard work recognition through the piece.

“These are ordinary people [doing their jobs] in extraordinary circumstances,” Plotkin said. “They should be recognized for what they do regularly.”

Despite the initial surge of participants in the project, Hausman said the number of incoming submissions and visits to the Viral Imaginations website have decreased. Because of this, Mekel said the team has hired three interns: Penn State graduate Johanna Vallejo and current students Marta Tymchenko and Nick Alico.

Vallejo and Tymchenko will help with curation of works and outreach, and Alico will assist with data analytics. Mekel said she hopes these interns will be able to revive the gallery by continuing promotion through this summer and the next academic year.

There are also plans in the works for a second phase of the project — Huck Institutes Director of Science-Art Initiatives Daryl Bradford and Senior Research Artist Talley Fisher were appointed to create a travelling display for the gallery so works gathered by Viral Imaginations could be taken to each Penn State commonwealth campus once in-person events are permitted again.

Regardless of what phase the project is in, Mekel said she hopes Viral Imaginations encourages people to “create without judgement” and come to a better understanding of one another’s experiences.

“Oftentimes, it is easier to see the impacts of a situation through the experiences of a few individuals instead of through [statistics],” Mekel said. “I hope we develop a better sense of empathy for others… and what they are going through.”

The coronavirus has impacted certain communities, like lower income households and people of color, more than others — something acknowledged …

'The Office' vs. 'Space Force': Which Steve Carell character is better? | Opinion

“‘You miss 100 percent of the shots you don’t take.’ - Wayne Gretzky” -Michael Scott. Written on a whiteboard by Michael Scott, the inept boss…

Child maltreatment, or CM, is defined by many medical journals as a significant health issue linked to problems including heart disease, cance…

For the first time since the conclusion of the Space Shuttle Program in 2011, NASA — in partnership with SpaceX, a commercial aerospace compan…

Bored and looking for something creative to do? Interested in art, but not a great artist? Fortunately, the Palmer Museum of Art has just the …

Penn State professor Matthew Restall has spent most of his career teaching, researching and writing about Latin American history, but his late…