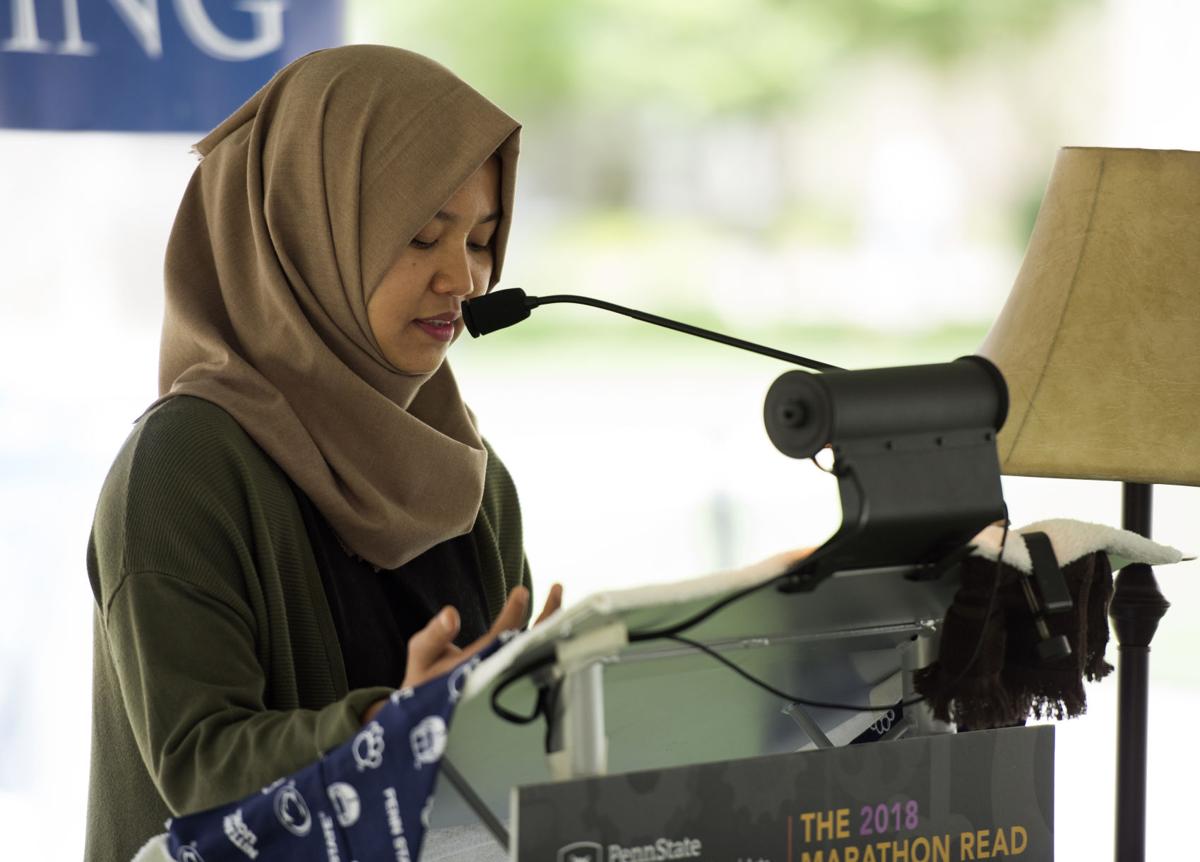 Siti Nuraeni (graduate-curriculum and supervision) reads from the book "Pages from 1968" during the 2018 Marathon Read on the Pattee Mall on Thursday, Sept. 13, 2018. 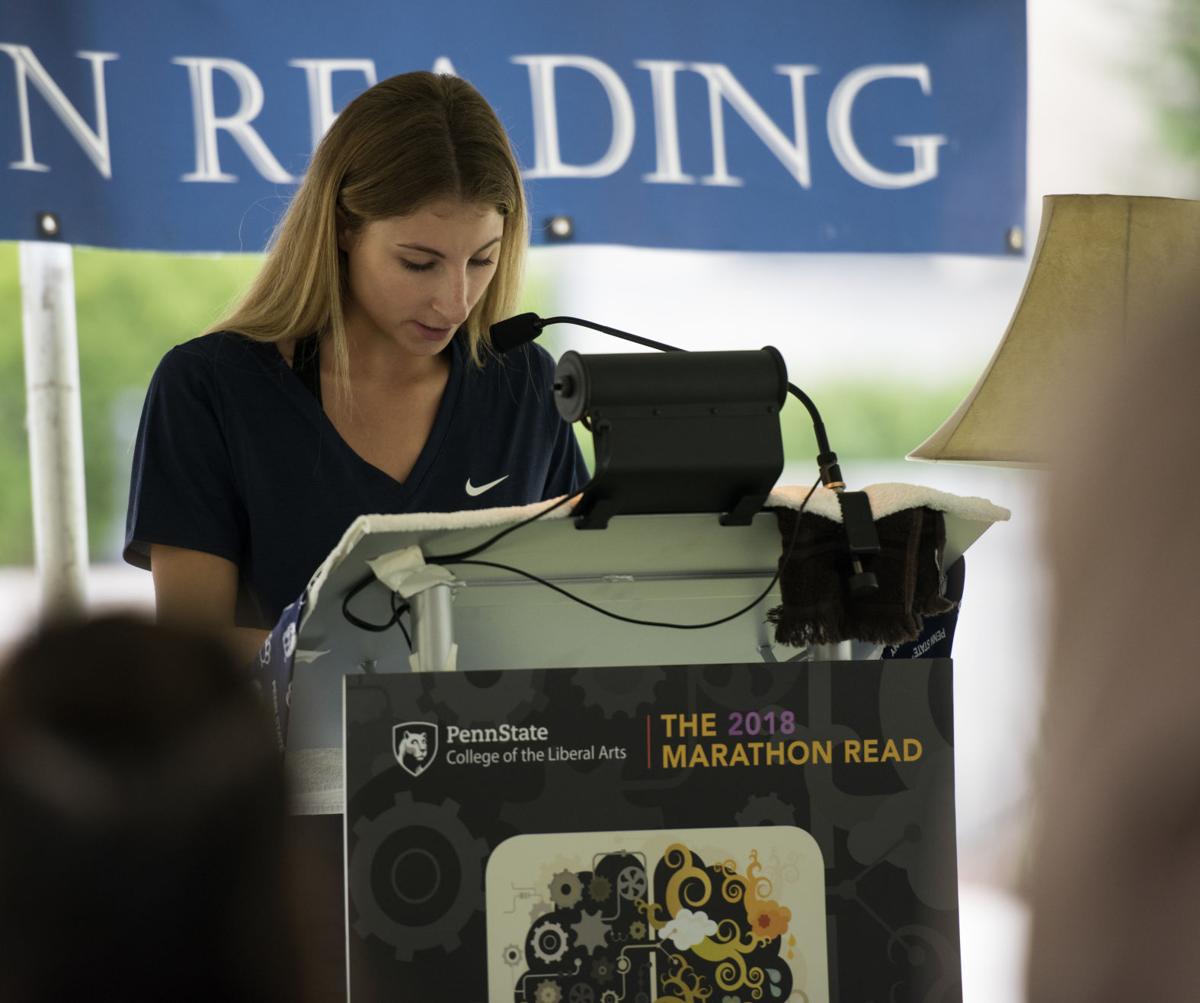 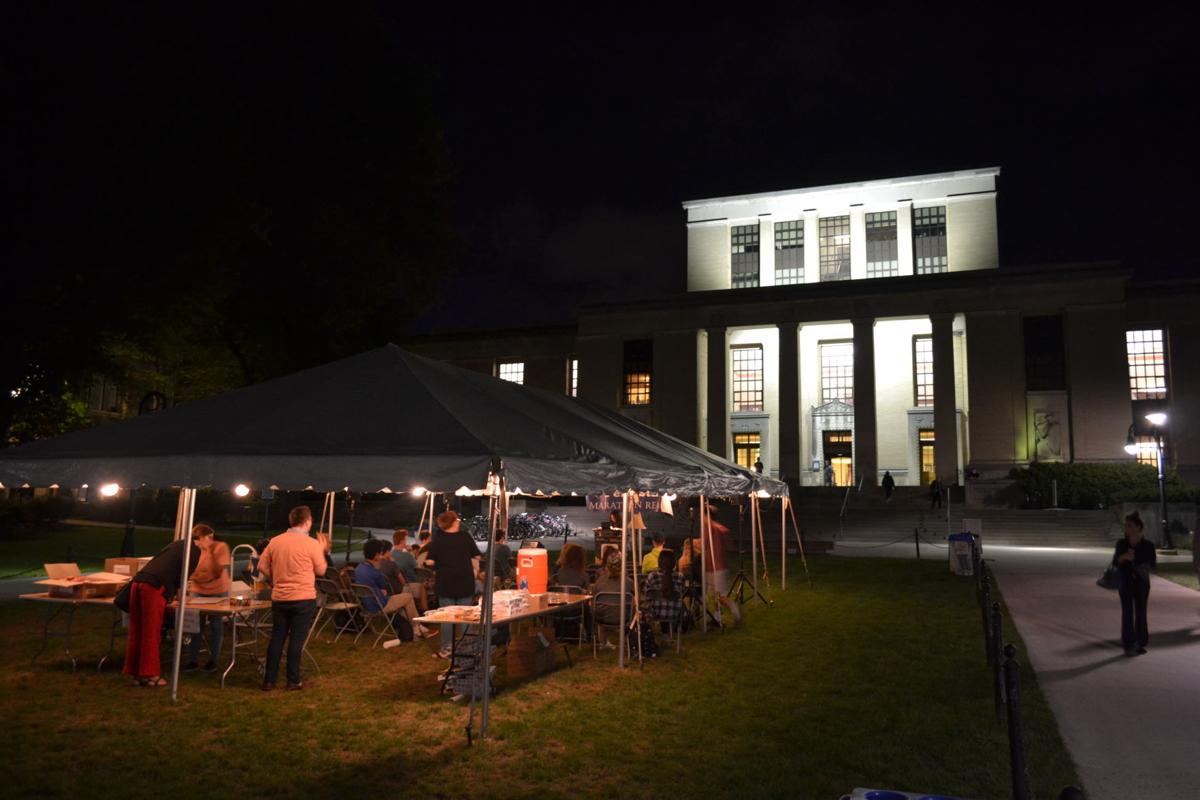 The Marathon Read tent at night.

Siti Nuraeni (graduate-curriculum and supervision) reads from the book "Pages from 1968" during the 2018 Marathon Read on the Pattee Mall on Thursday, Sept. 13, 2018.

The Marathon Read tent at night.

First, a tent was set up in front of the library. Chairs were positioned, pizza was brought, and a stack of pages was placed on the reading stand.

For 12 hours on Thursday, a strip of the Pattee Mall became home to the annual Penn State Marathon Read, an effort started by the College of Liberal Arts in 2012.

Joe Bueter, an assistant teaching professor of English, helped choose the theme. Bueter has been participating in the event for four years, and was a co-organizer for this year's event.

“It’s sort of dovetailing with the College of Liberal Arts, which is doing a two-year theme around 1968,” Bueter said. “It’s been 50 years since so much really important stuff happened in 1968, and we wanted to be a part of the larger thing going on at the university.”

The works chosen to be read included classics such as Philip K. Dick’s “Do Androids Dream of Electric Sheep?” and poetry by Gwendolyn Brooks.

Jill Engle, a professor of clinical law at Penn State Law, attended the reading with the hopes that she would get to read a piece of writing by her favorite author, Joan Didion.

“I was really excited because [reading from Didion’s work] was a happy coincidence and kind of a full-circle moment for me,” Engle said.

Engle got her wish, and read a section from Didion’s Goodbye to All That.”

“It felt like I was eating a delicious meal with each word,” Engle said. “I always like her tell-it-straight style, her dry wit and I think she depict image of surroundings very well. She is one of the most important female writers from [1968].”

Other writers featured in the event were Alice Munroe, Etheridge Knight, Jorge Luis Borges as well as Sontag’s famous “Trip to Hanoi.”

Members of the French Department arrived later in the evening to read slogans of the student protests that occurred throughout France during May 1968.

“Poetry in the street,” was a crowd favorite slogan performed and translated by the department.

At the end, applause rang from the last few rows of chairs as Willa Z. Silverman, head of the Department of French and Francophone Studies, walked away from the stand. Silverman believed that it was important for her department to come together to acknowledge the importance of the year 1968 in France.

Silverman, who studied at the University of Paris VIII in 1980, also spoke to the event’s thematic origins.

“These slogans are very iconic representations of that year and [the department] felt this would be a perfect opportunity —especially as the Marathon Read acknowledges banned books week and freedom of expression— to come out here collectively and celebrate that spirit of contestation and revolt as well as playfulness and imagination that was part of the youth culture of the period,” Silverman said.

From faculty members to students, nearly everyone had a book in their hands.

Sabrina Evans read an excerpt from a collection of Gwendolyn Brooks’ poems, believes the event is a way for all students to come together.

“I think it’s important for undergrads to see that graduate students are participating as well,” Evans (graduate-English) said. “[I wanted] to feel connected [to the university] in a larger scale.”

As the 2018 Marathon Read came closer to its end, 12 people remained in the tent, nodding along to the voices of 1968. Some left, others arrived. A passerby stopped in his tracks to listen.

As a bell chimed from Old Main, the person at the stand continued to read louder.

“I love the idea of having something that’s big and in the way of people, in terms of a reading event,” Bueter said. “People come in and they listen and they read. They engage with literature in some way, like it almost can’t be helped.”