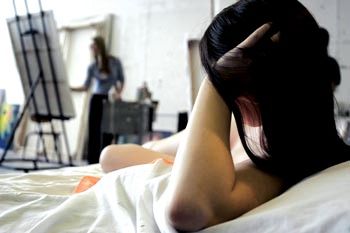 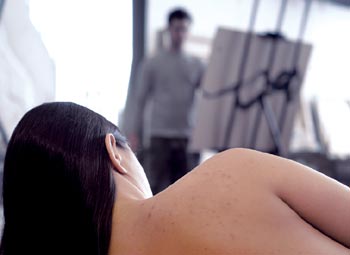 On the third floor of the Visual Arts Building in a classroom with floor-to-ceiling windows and air that hangs heavy with heat, Travis Iommi climbs the stage and does what many people would never dare to do: He takes his clothes off.

The 16 students gather in a semi-circle around the stage, grab their pencils, charcoal or Crayola crayons and begin to draw.

Iommi (junior-economics and business administration) is a nude model, and for 40 minutes he holds still, completely nude, in a pose reminiscent of the bronze sculpture "The Thinker" while student artists sketch his body.

"Nude modeling is incredibly important," Lindsey Page (senior-art), a student in the class, said. "Drawing from a photograph versus drawing from a real human being is a world of difference."

"You can go all the way back to the beginning of history and see that there's nudity in art," said Charles Garoian, director of the School of Visual Arts, who has spent 35 years researching and teaching art.

Garoian said the body has historically been used by artists to interpret the human condition of that time period.

Iommi said he is interested in modeling because art fascinates him.

He also said he models because it is important to help students develop as artists.

"I think you have to be willing to hurt for art," he said, adding that the poses a model maintains can sometimes be physically demanding.

Melissa Dangel (freshman-division of undergraduate studies) said she fainted during a modeling session while standing with her knees locked for more than a half hour. She explained the locking of her knees restricted her blood flow.

"It [modeling] is a lot more difficult than you think," she said, adding that she would not make the same mistake in the future.

Dangel said people's reactions to her job can also be hard to deal with.

"We really appreciate the models that we have," he said, referring to the nine models the school employs, most of whom are students. "It takes a certain amount of freedom and courage to do what most people in our society wouldn't do because there's a misunderstanding in our culture between nudity and nakedness."

He said the difference between a nude and a naked body is the context in which it is placed.

"What art-making does is save culture," he said. "It contributes to an understanding of what human life is in culture."

Garoian said the school advertises for nude models at the beginning of the semester, and the school gets a moderate number of replies.

Model Raymond Bryer (junior-journalism) said aside from his $10-per-hour wage, he enjoys seeing how student artists portray him.

"It's interesting how people see the same thing differently," he said. "And additionally, it's more interesting when that thing is you."

"I don't think this is a job for someone who doesn't have a good self image," he said. "I think you have to be comfortable in your own skin."

Dangel said that is one of the reasons why she decided to do nude modeling.

"It's definitely something I'll continue to do," she said. "It's good for self-image that you see yourself more as art rather than as things you need to work on."