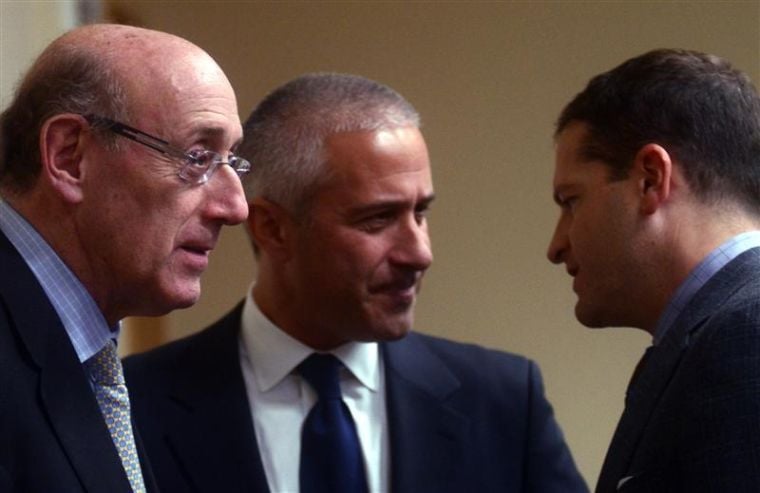 Kenneth R. Feinberg and Michael K. Rozen speak at the Board of Trustee meeting in Friday night at the Penn Stater Conference Center. 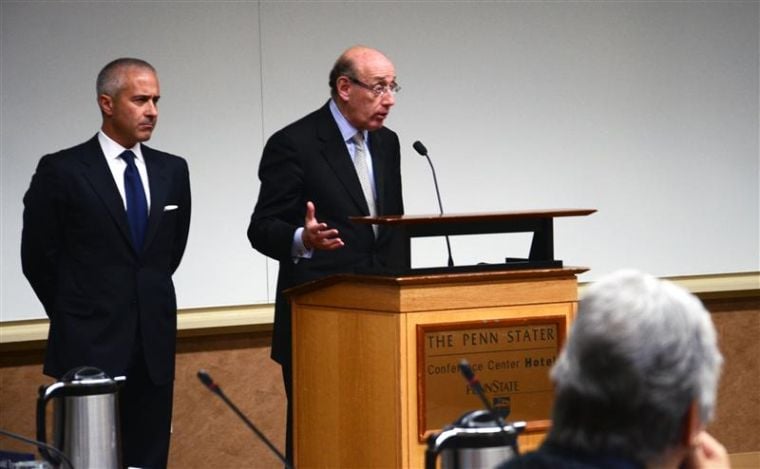 Michael K. Rozen (left) and Kenneth R. Feinberg speak at Friday's Board of Trustee's meeting at the Penn Stater.

Kenneth R. Feinberg and Michael K. Rozen speak at the Board of Trustee meeting in Friday night at the Penn Stater Conference Center.

Michael K. Rozen (left) and Kenneth R. Feinberg speak at Friday's Board of Trustee's meeting at the Penn Stater.

The Penn State Board of Trustees approved a resolution Friday to allow for the legal subcommittee to approve possible settlements against the university related to claims of those abused by former assistant football coach Jerry Sandusky.

The subcommittee is part of the Committee on Legal and Compliance and the resolution was approved by every member of the board after a brief discussion.

Chairman of the Board Karen Peetzsaid the subcommittee has been “deeply immersed in the in the facts of these cases” and that the board has “a great deal of confidence” in it. She also said the subcommittee members have been able to convene on short notice and on a regular, weekly basis.

Current discussions have not resulted in approved settlements so far, Peetz said. When asked if settlements will be publicly announced when approved, Peetz said, “We haven’t gotten that far yet.”

Peetz also said that in an earlier discussion, they moved to add Trustee Adam Taliaferroto the subcommittee, which is comprised entirely of attorneys, except for Keith Eckel and Ira Lubert.

The Subcommittee on Legal is headed by Eckel and Lubertand will work with Feinberg Rozen LLP, the law firm retained by Penn State to work with the counsel representing the plaintiffs for the settlements.

Kenneth Feinberg said he and Michael Rozen have been chosen to help facilitate and mediate the settlements, and that they do not have the authority to bind Penn State to do anything.

Feinberg Rozen LLP has also worked on cases that resulted from the 9/11 terrorist attacks, Hurricane Katrina in 2005 and the Virginia Tech shootings in 2007.

Feinberg said the university has not allocated them an “aggregate amount of money” to divide among the cases. Instead, each case will be handled individually and some may not even be settled, he said.

Rozen added that there are currently 20 to 25 claims against the university, and that number may increase or decrease in the future. All of the current cases have begun discussions, but no counsel for the settlement cases have concluded that their case will in fact be settled, he said.

Prior to the special meeting, Trustee Anthony Lubrano said he was not in favor of the resolution. But, due to discussion from Feinberg and Rozen, he in turn favored the resolution.

Members of the Committee on Audit and Risk also met earlier on Friday morning to approve the minutes of previous meetings and discuss a draft of the 2011-2012 review of audited financial statements.

In his report, University Corporate Controller Joseph Doncsecz included that there is still “sufficient uncertainty” in terms of how much the settlement talks will ultimately cost.

He also said the university will pay its first installment of $12 million for the $60 million NCAA sanctions in December.

The board will reconvene on Nov. 16 for its next regularly scheduled meeting.